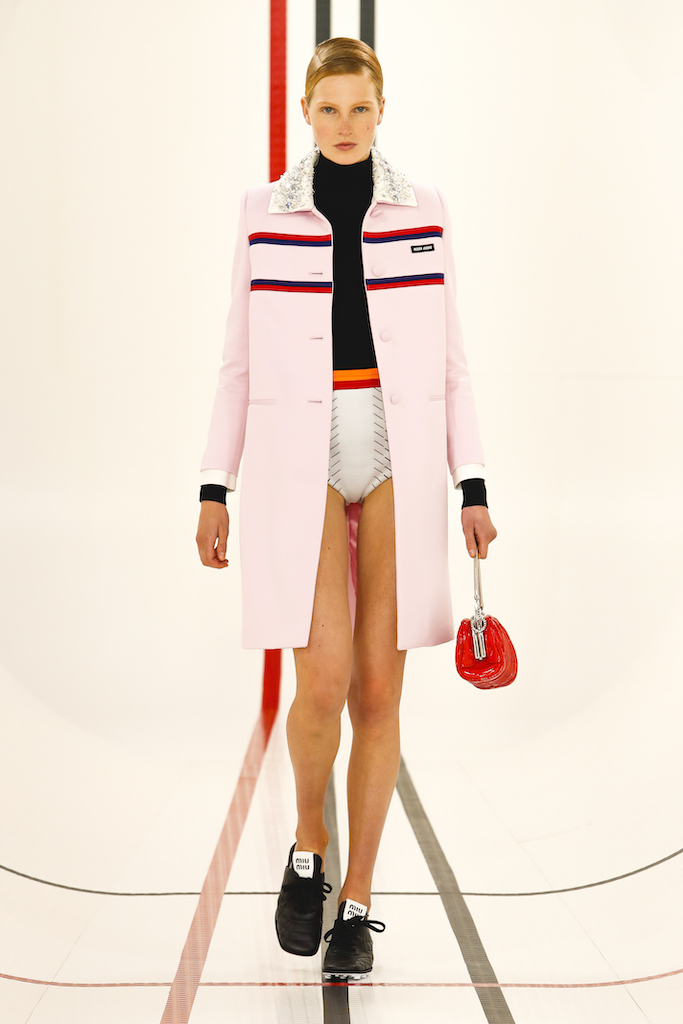 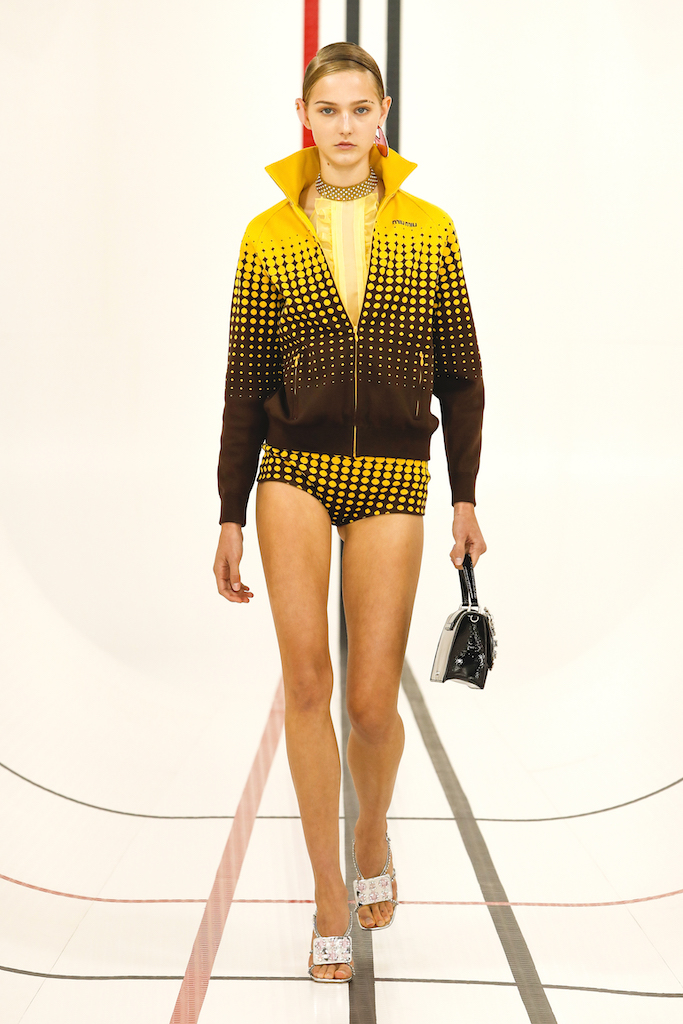 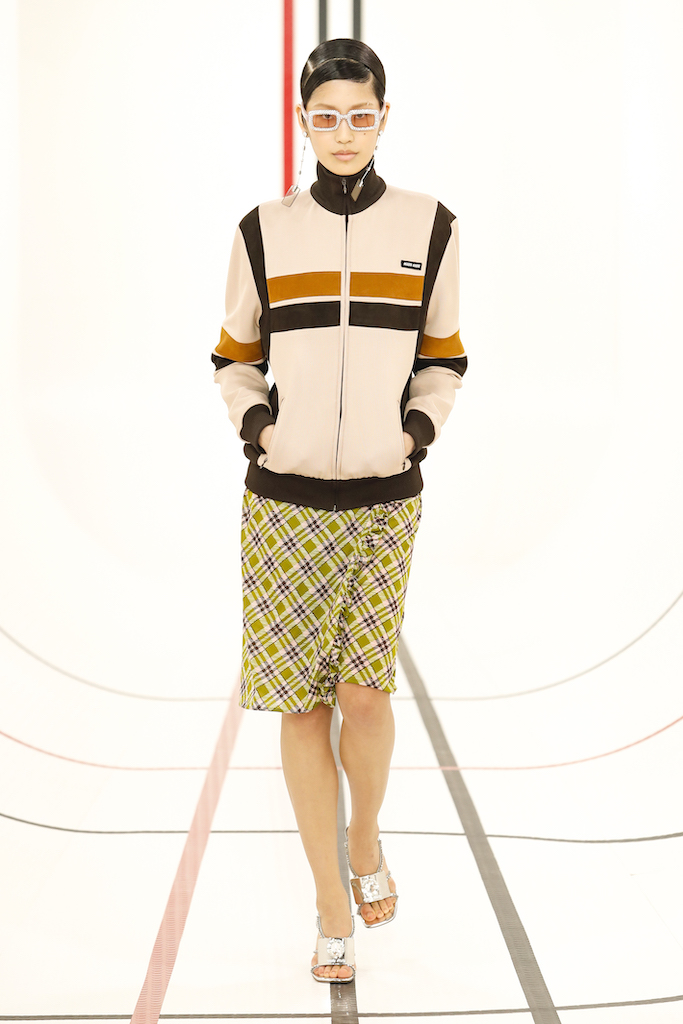 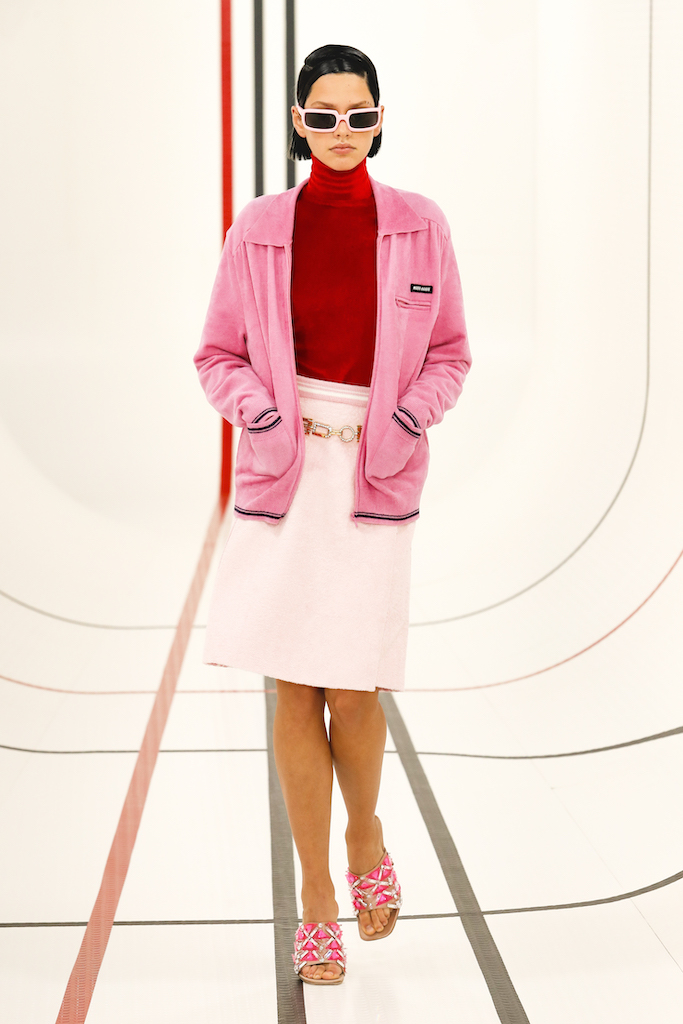 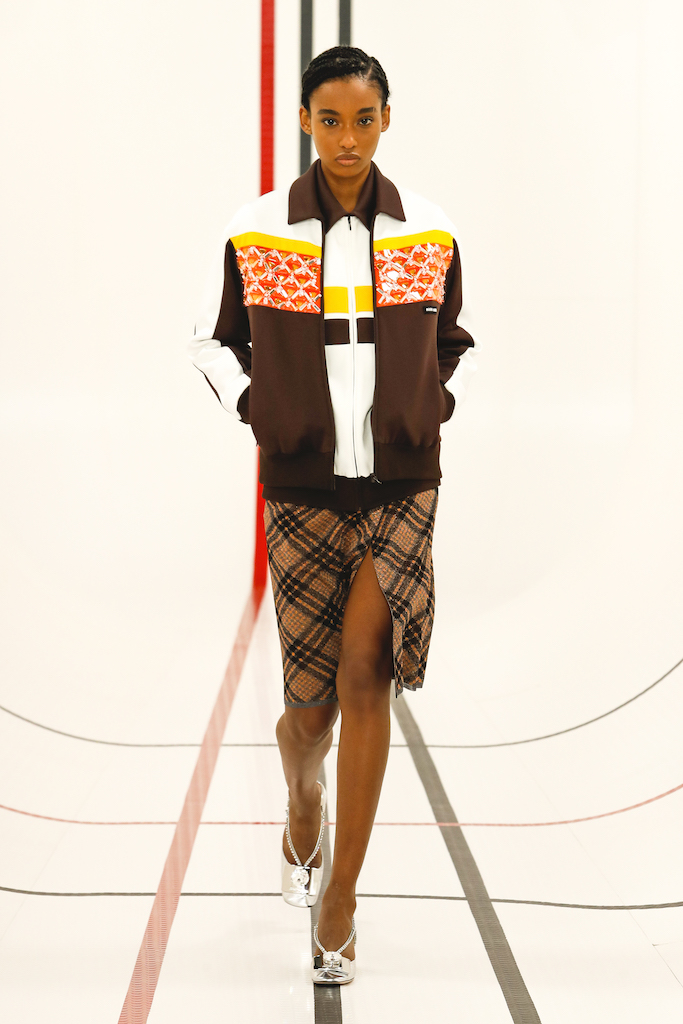 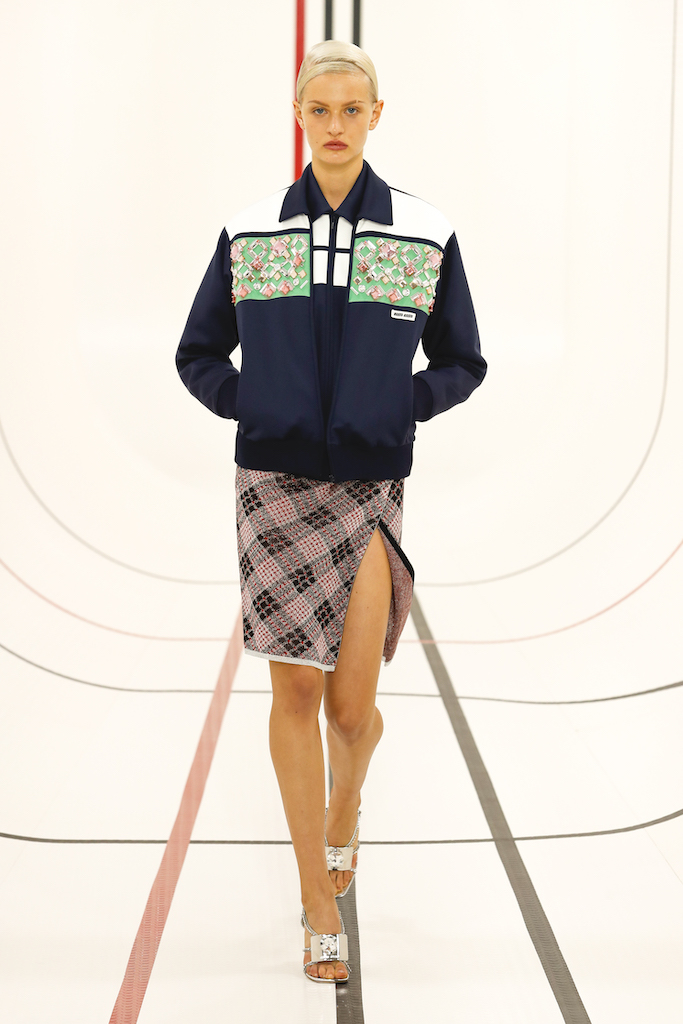 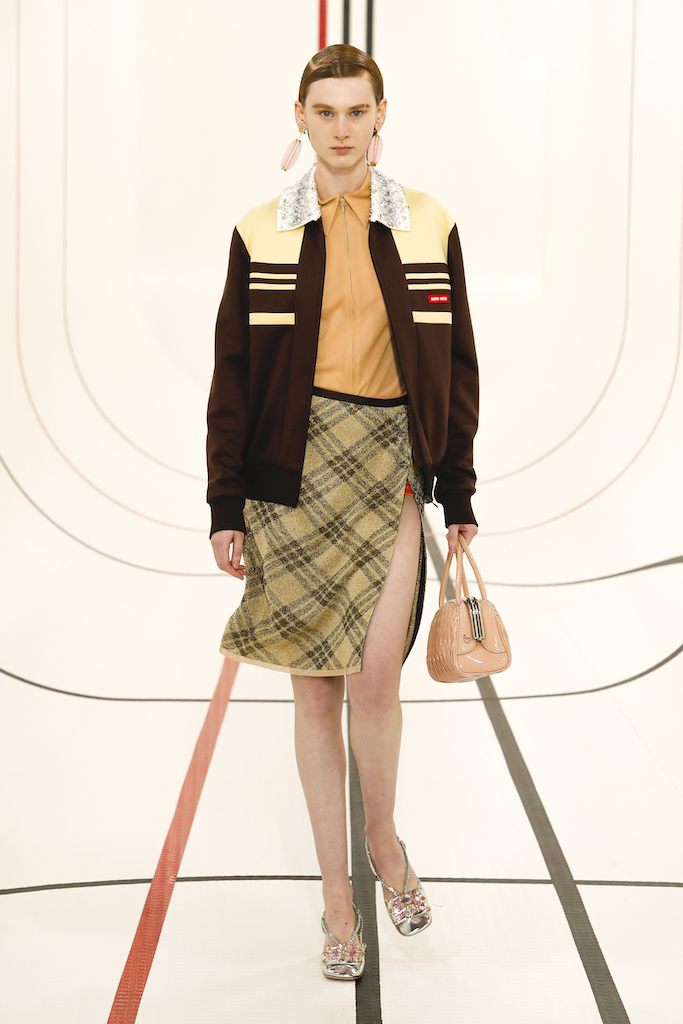 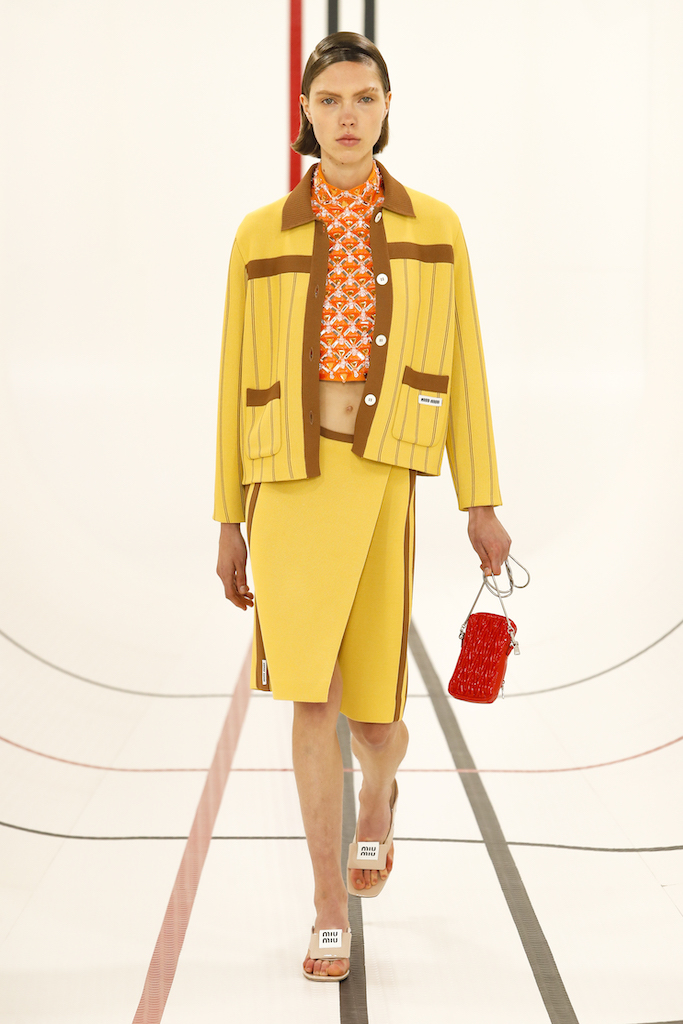 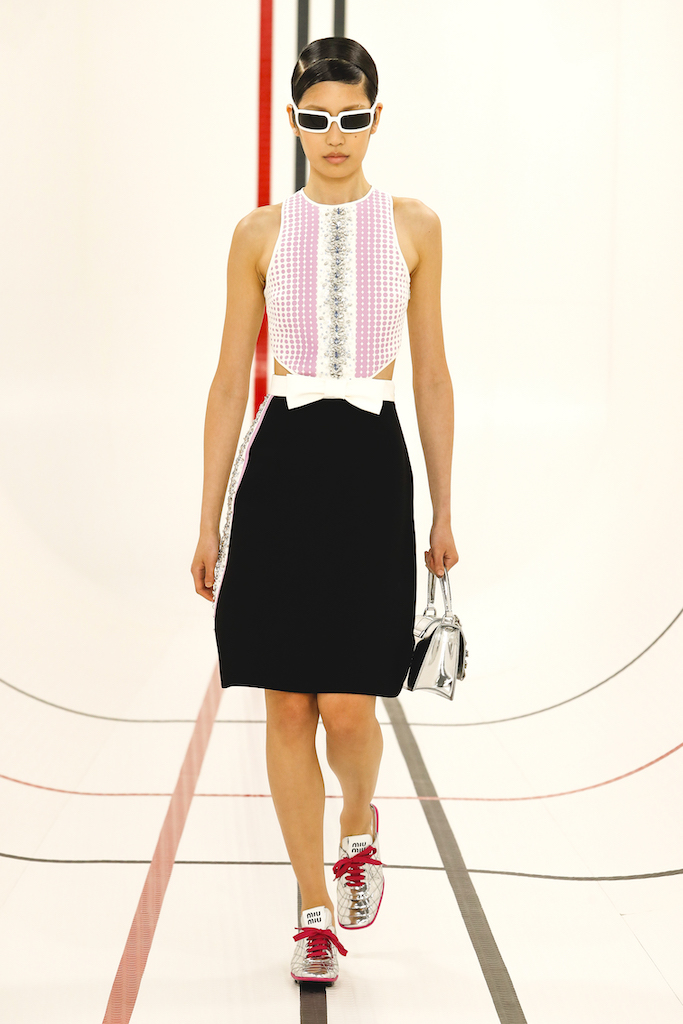 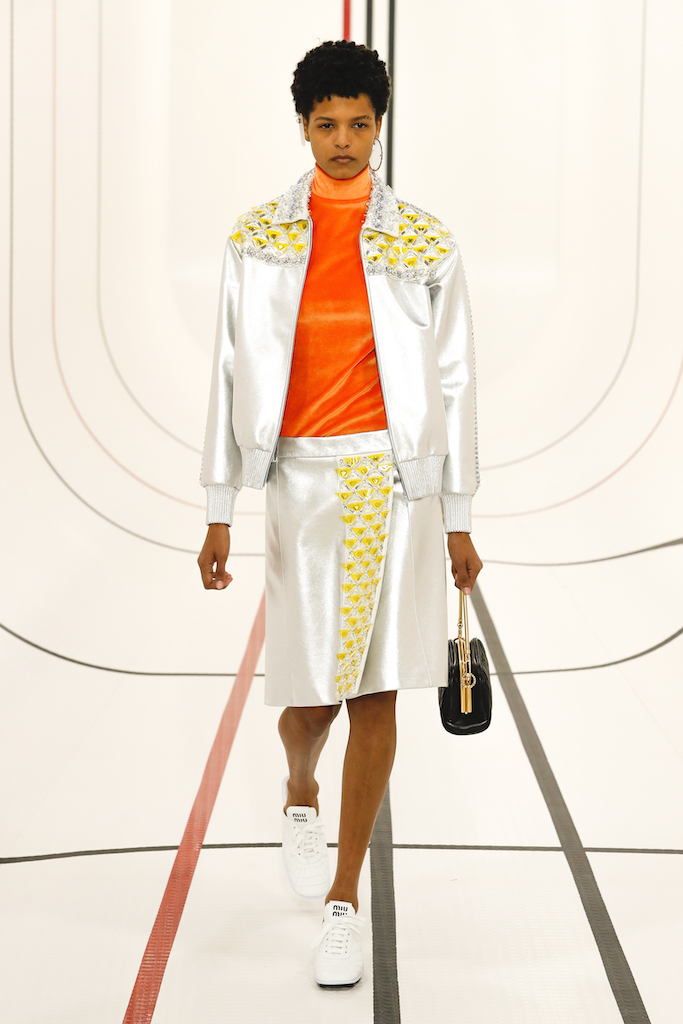 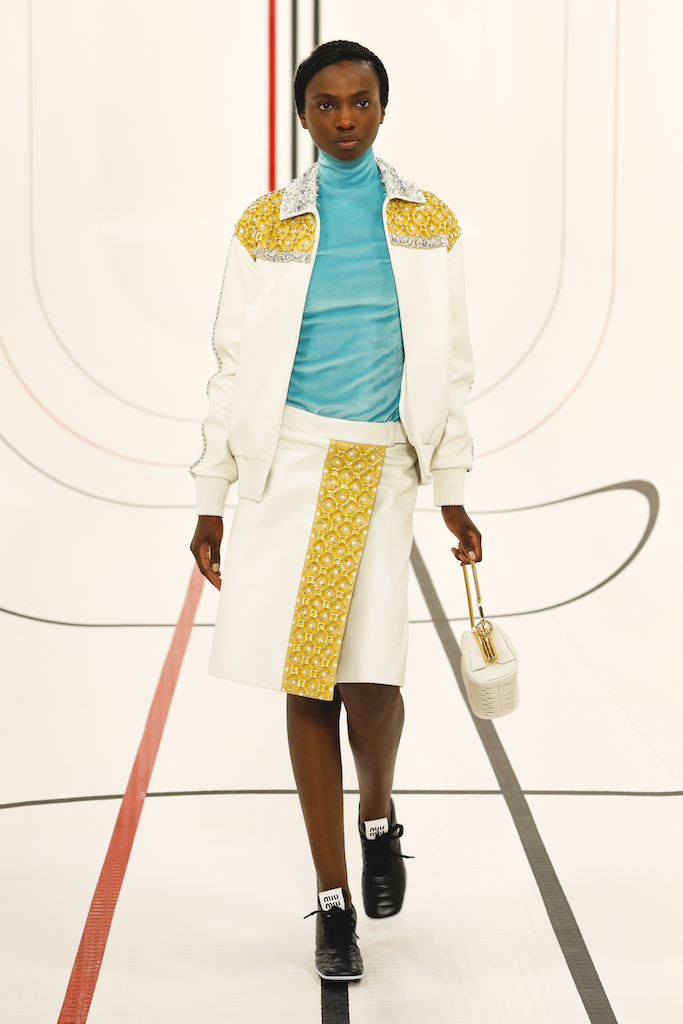 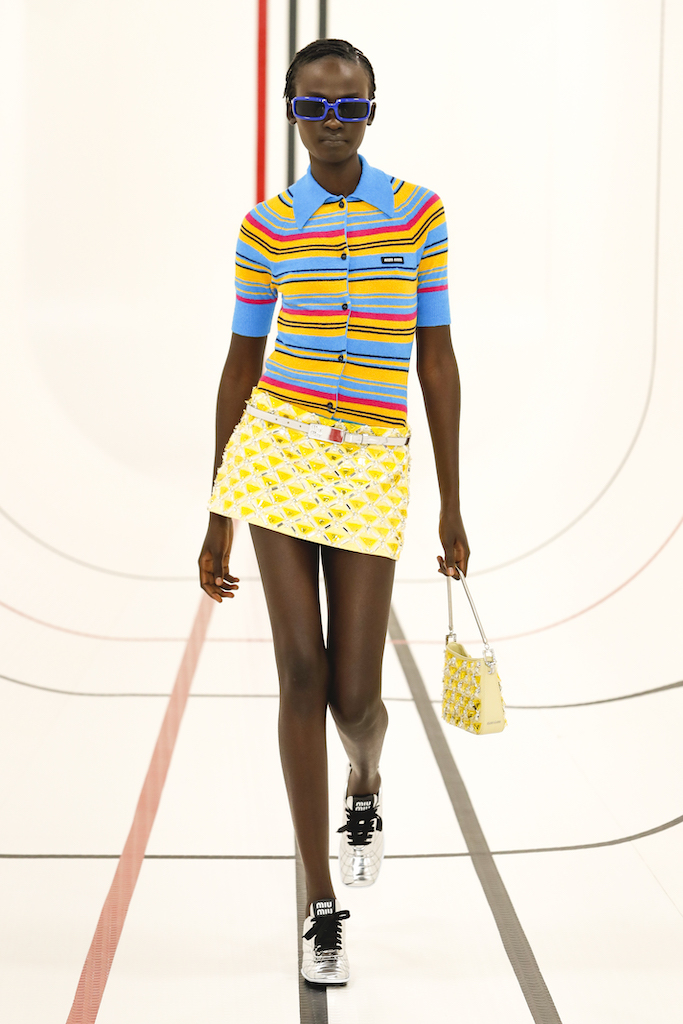 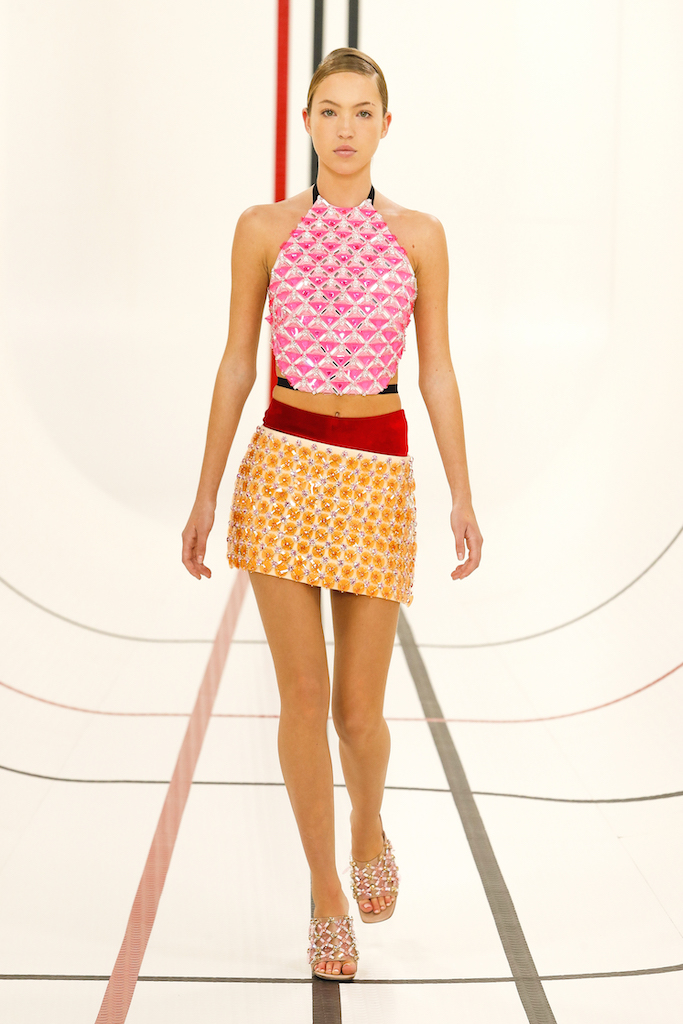 An impossible spectacle - a physical event mediated through the virtual, a community brought together through distance. A paradox. For her Miu Miu Spring/Summer 2021 collection, Miuccia Prada draws a global community of women today, at one time and to one digital space, to experience to enjoy together as in a perfect Miu Miu Club. The show and collection both draw on the mutual language of sport and of the fashion show, finding parallels in these two forms of spectacle, of performances observed. They share a common ground of the need for an audience, to bear witness. Both are a means of human expression, through which observation is essential.

Fashion shows and sport are created to be watched - to entertain, to bring joy. They are performative phenomena, where an audience is necessary both for the event and the players, in a two-way exchange. Each fosters a community intrinsically connected through the clothes they wear, their self-identification.

The stage for the Miu Miu show is an ampitheater a ‘sports palace’ dubbed the Miu Miu Club, it is re-imagined by AMO, experienced digitally by a specially-invited audience. Bright pink acoustic foam cossets phalanxes of video-screens displaying communities of Miu Miu women, gathered around the world. As with sport, fashion requires spectators - not the passive and unseen, but the active and interactive. Broadcast to the auditorium, the audience’s reactions create an unescapable rendezvous with the models. Their presence heightens and improves performance.

Inherent is a sense of polarity: evening clothing against sportswear, pragmatism and preciousness, reality versus digital, an event staged to an empty stadium, yet simultaneously observed by many. Clothes draw on the spectacular language of athletic clothing and embellished event clothing: block color, jersey, streamlined shapes, harness against decoration, embellishment, femininity, softness. The twin demands of action and attraction lead to similar aesthetic conclusions. Shapes are simple: blousons, straight pants, wrap skirts moving apart at the thigh. Fabrics are light, hemlines abbreviated, to free the figure inside.

The genesis of Miu Miu can become its exegesis: examination of the earliest years of the label reflects in simplicity of silhouette, consciousness of the body, and the exploration of a meeting-point between sportswear and fashion, an obsession of Miuccia Prada throughout her career. Footwear mixes sportswear archetypes with feminine tropes: sneakers and soccer boots with high heels. These dichotomous viewpoints are harmonious in practice because, ultimately, they reflect the duality of reality, of people.

Physique and physical, visual and virtual. In a context of necessarily heightened self-awareness, of ceaseless and unavoidable digital consumption of one’s own image, ultimately the most important spectator is the self.