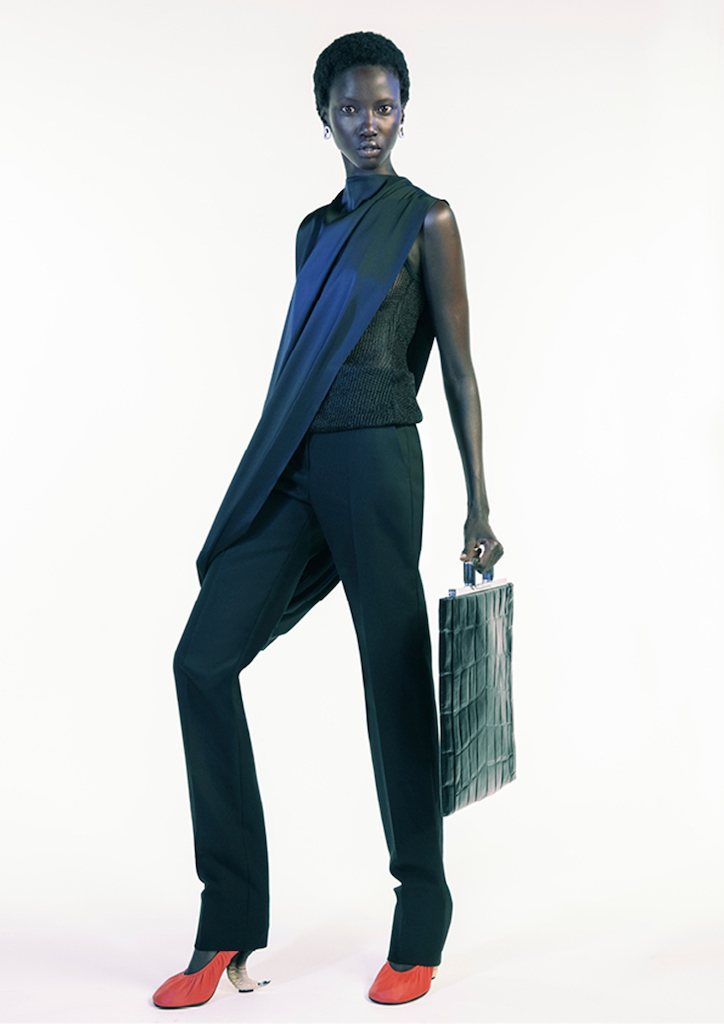 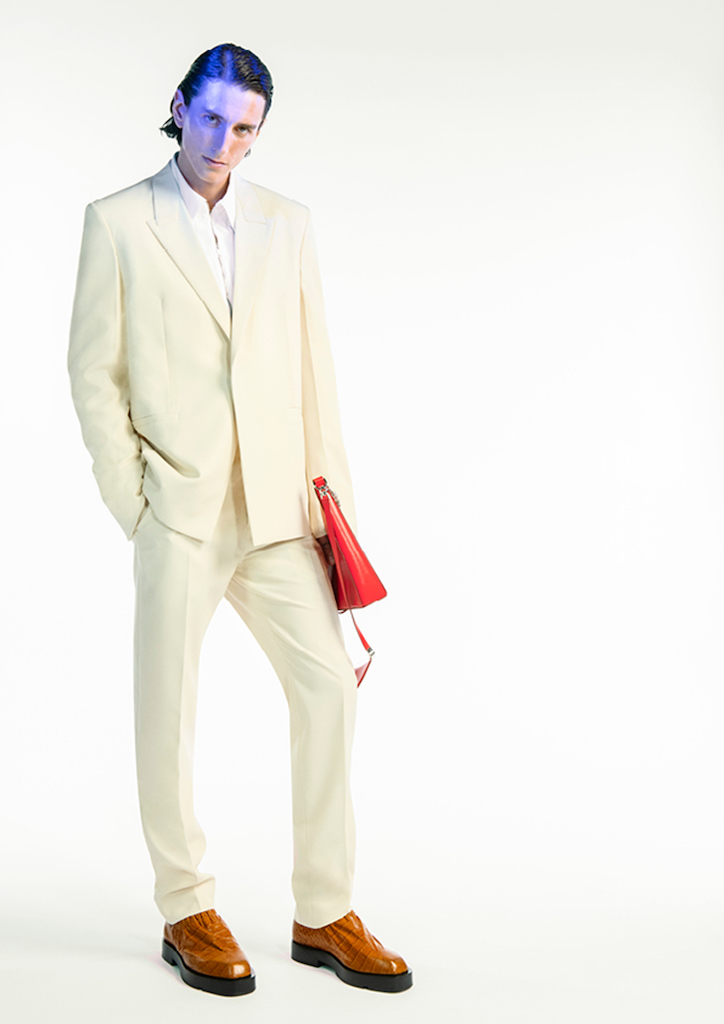 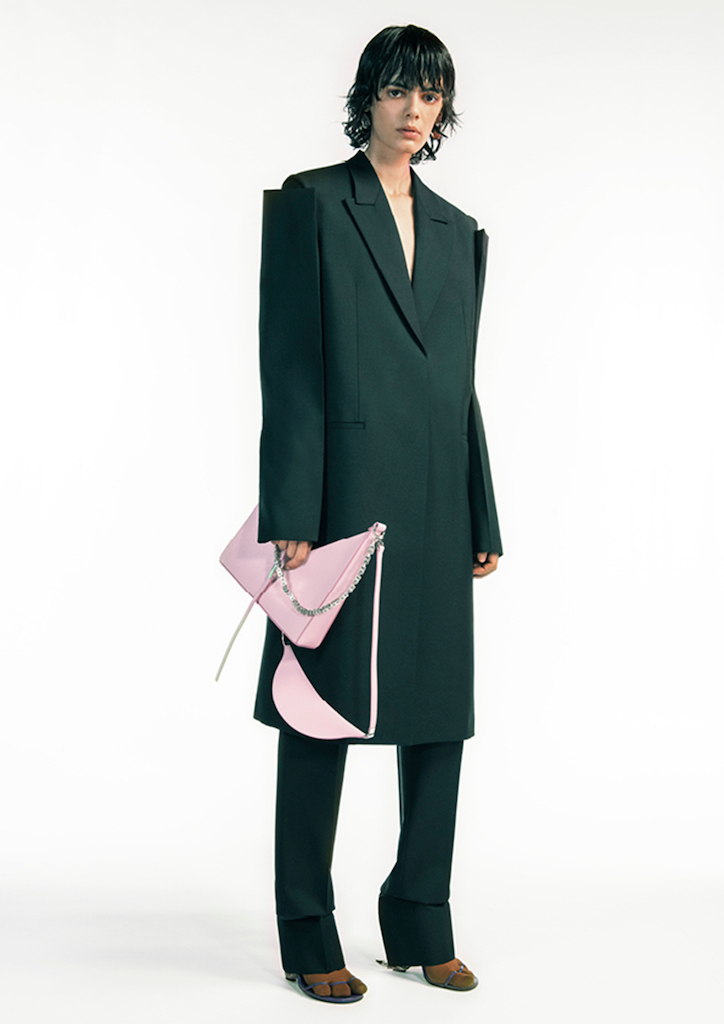 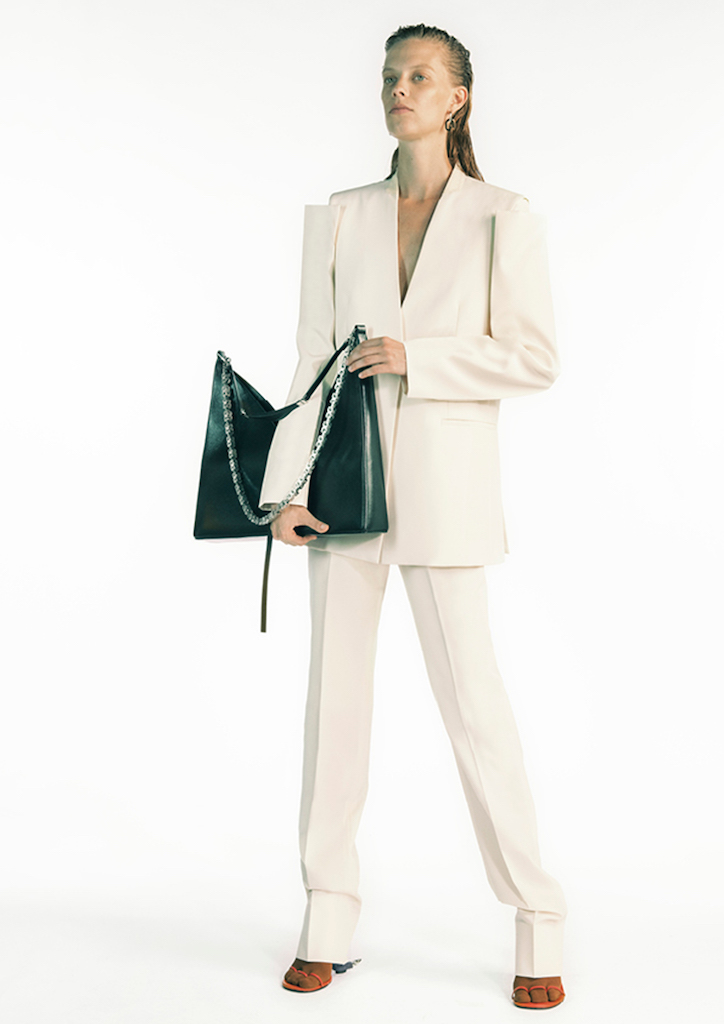 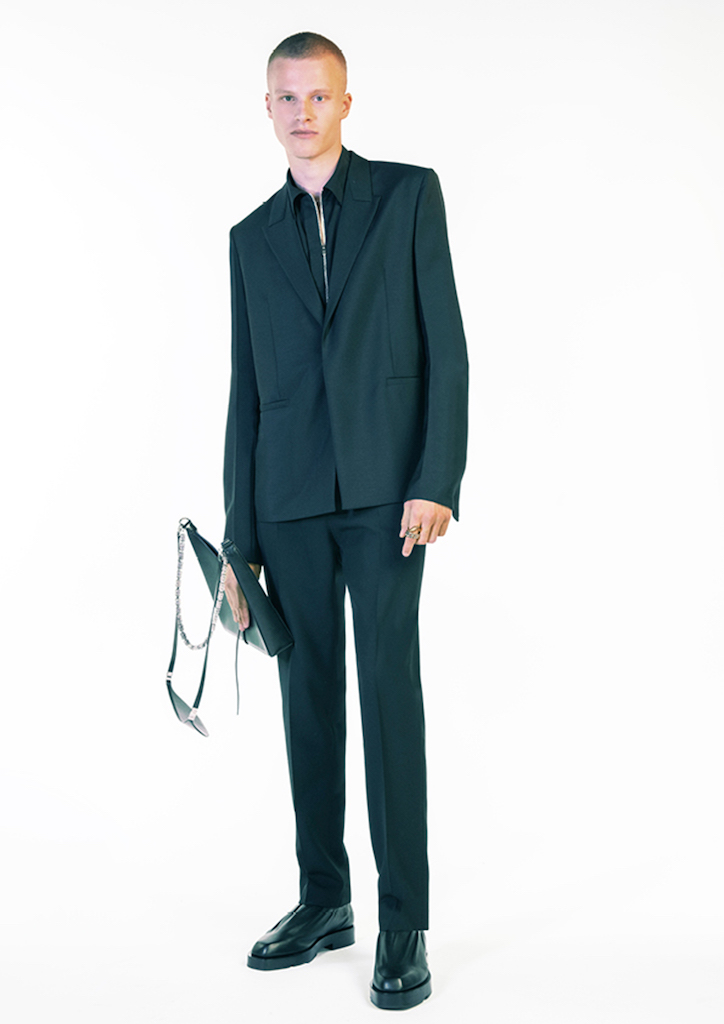 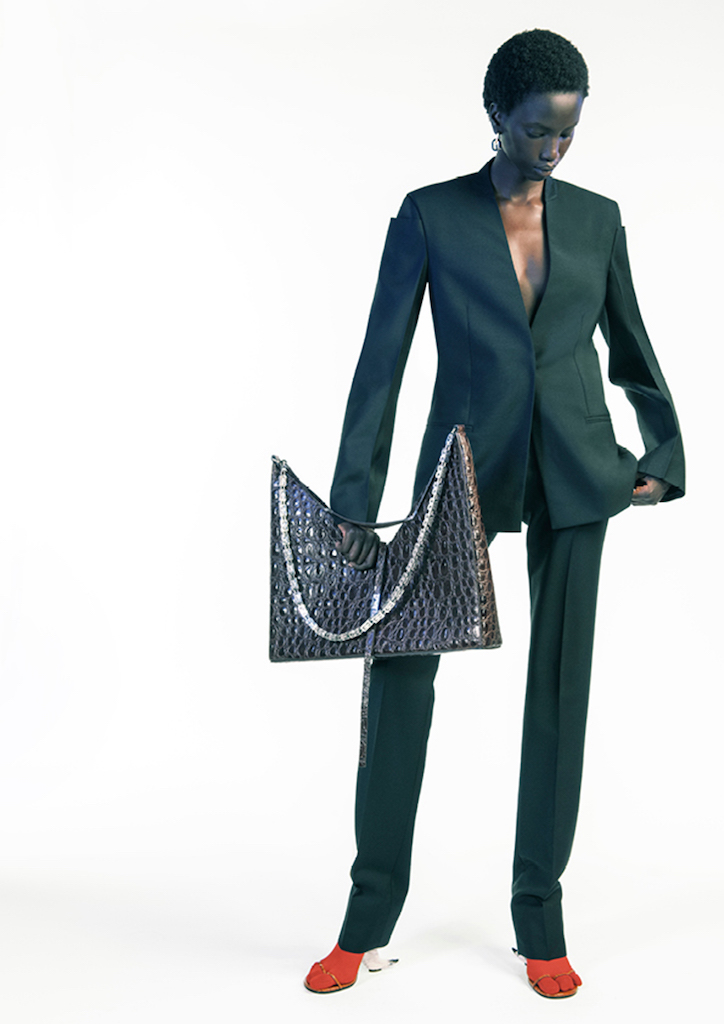 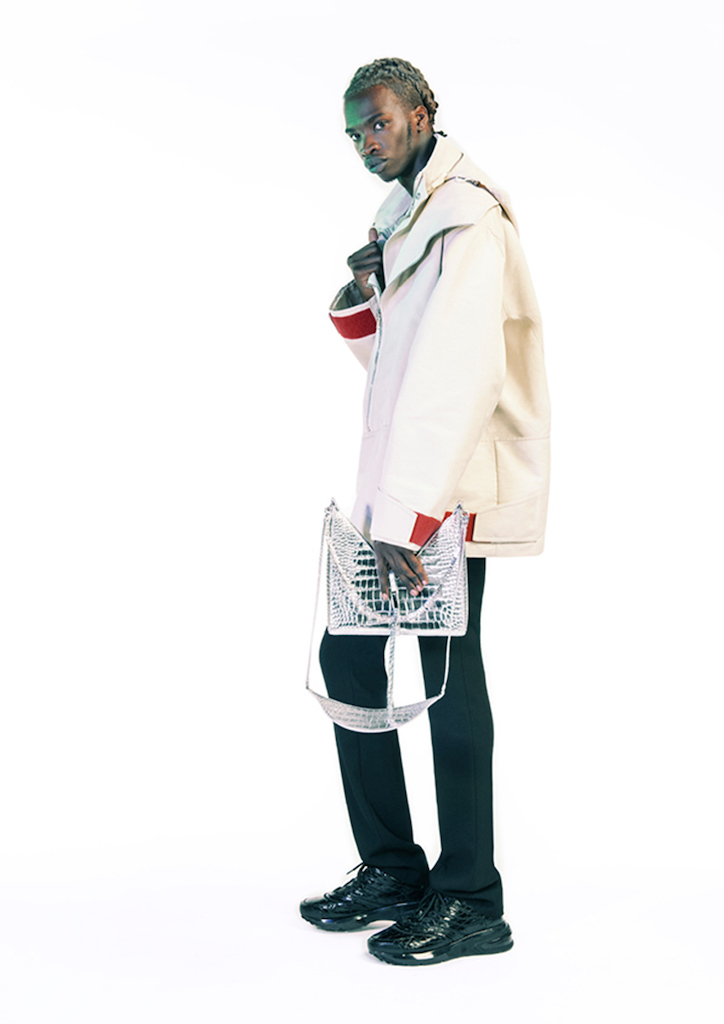 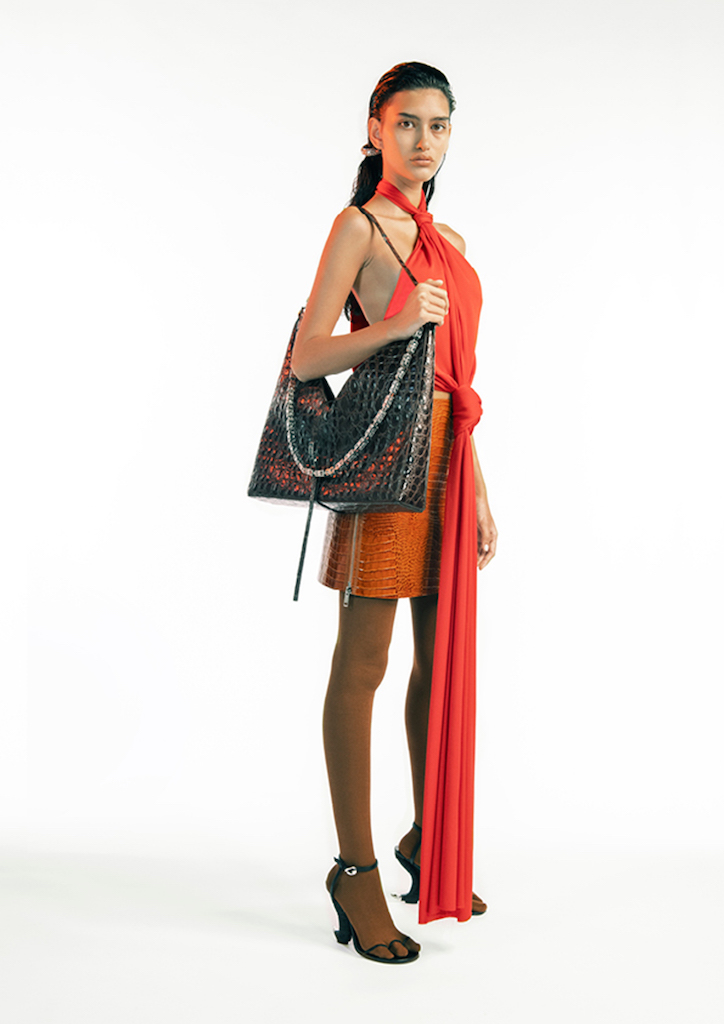 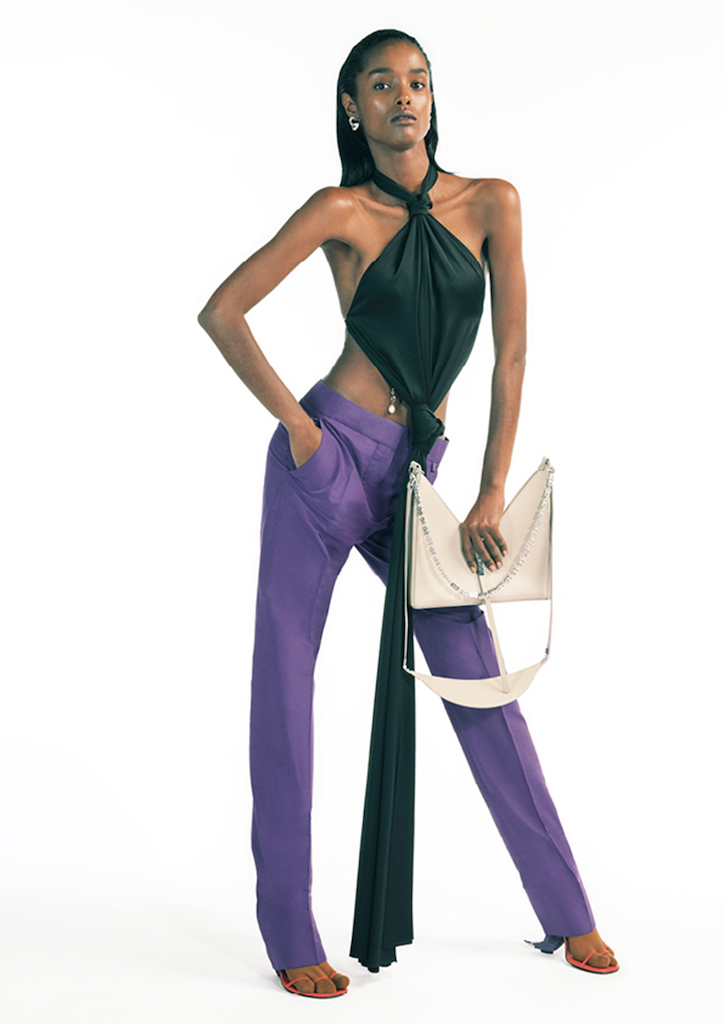 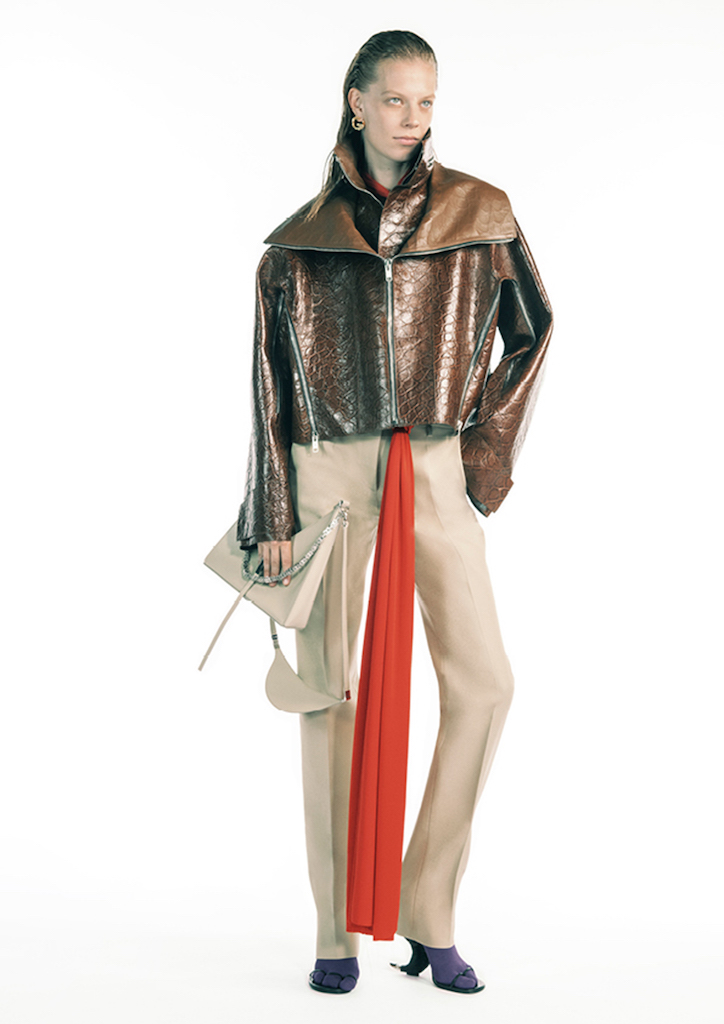 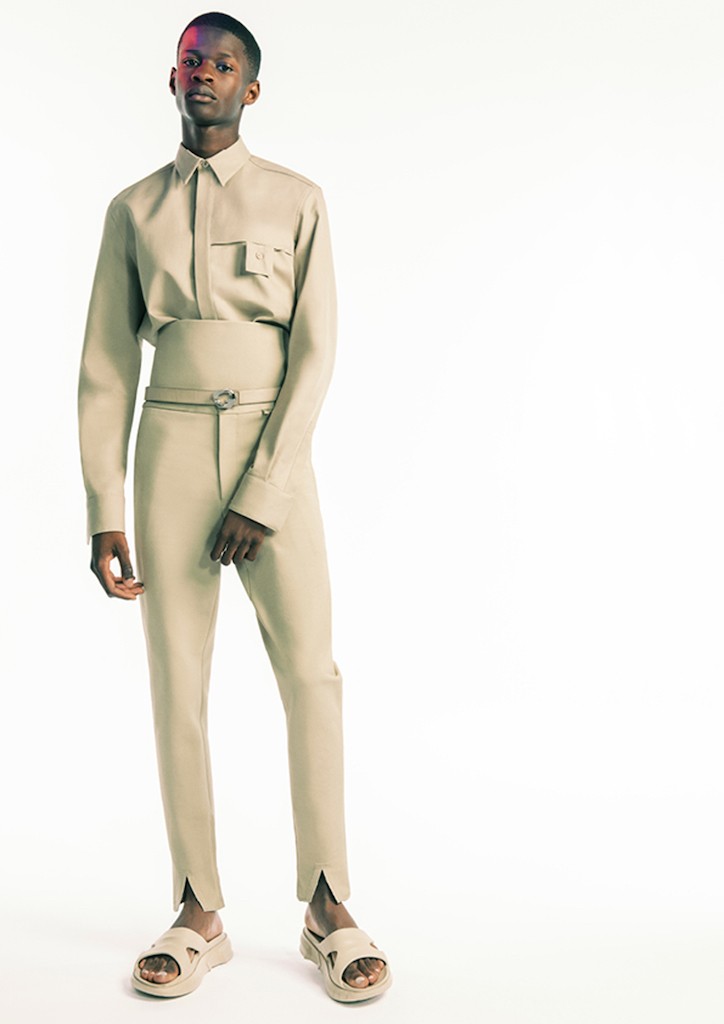 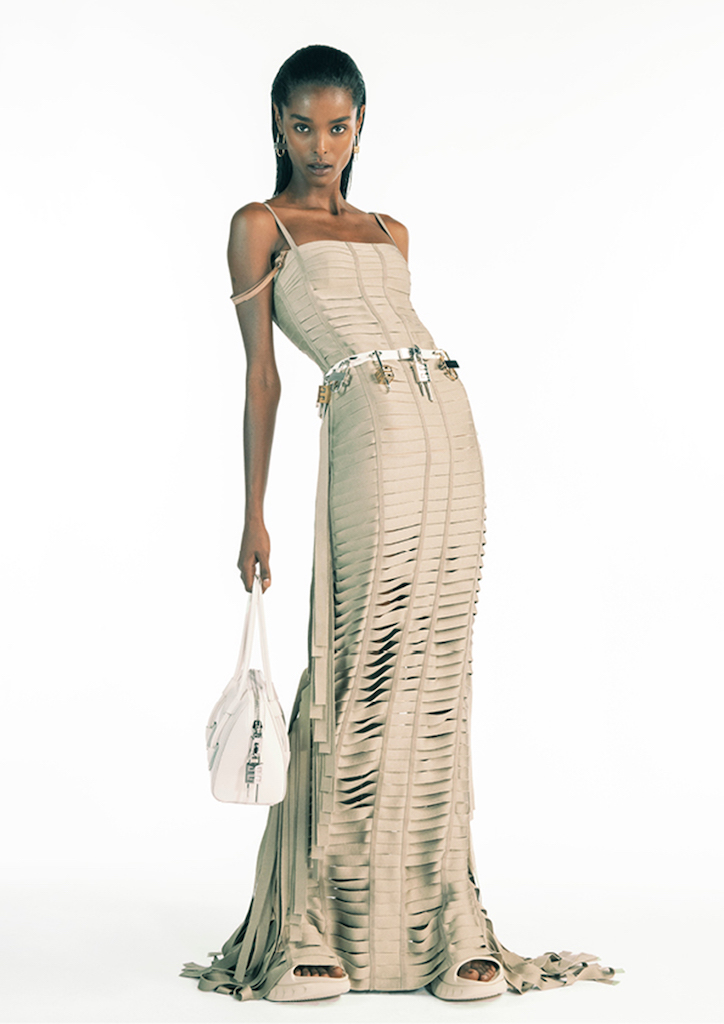 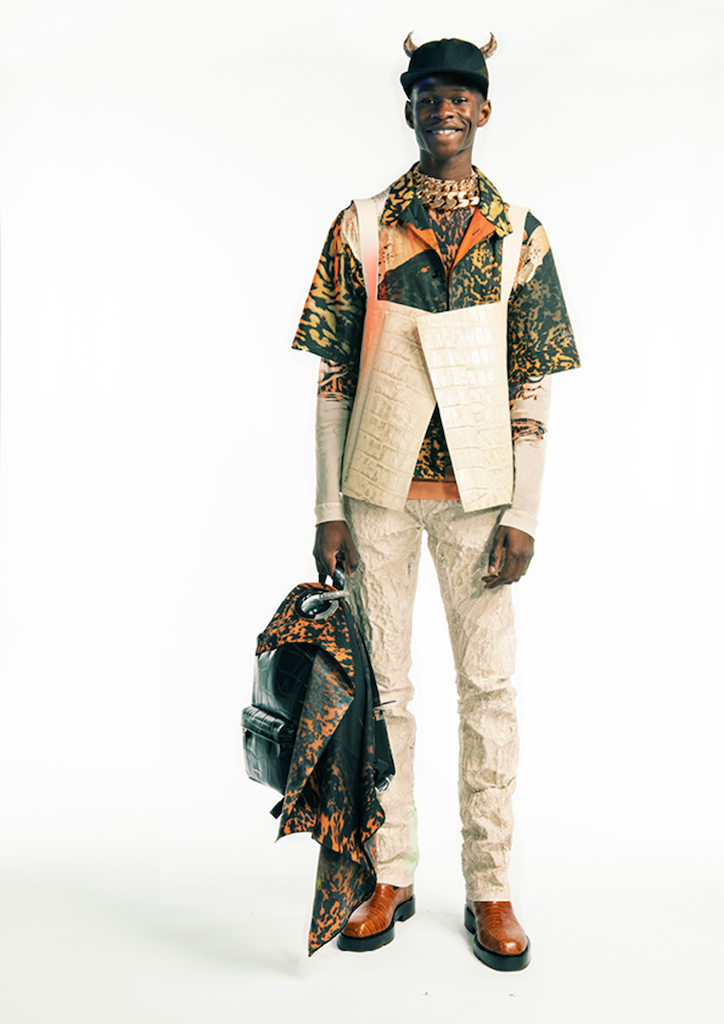 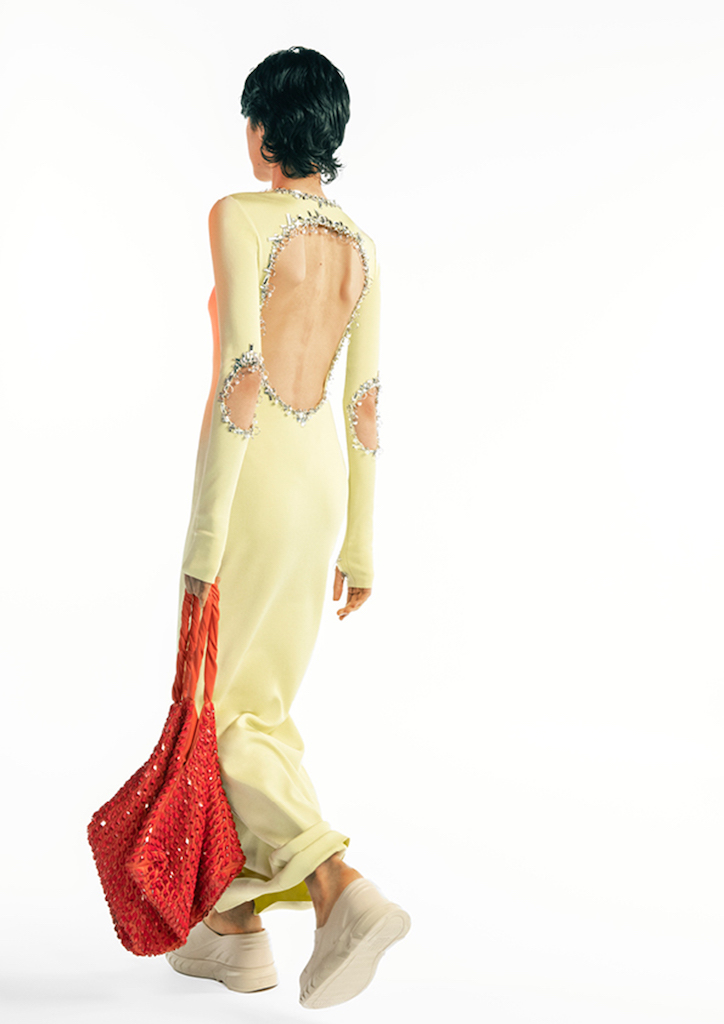 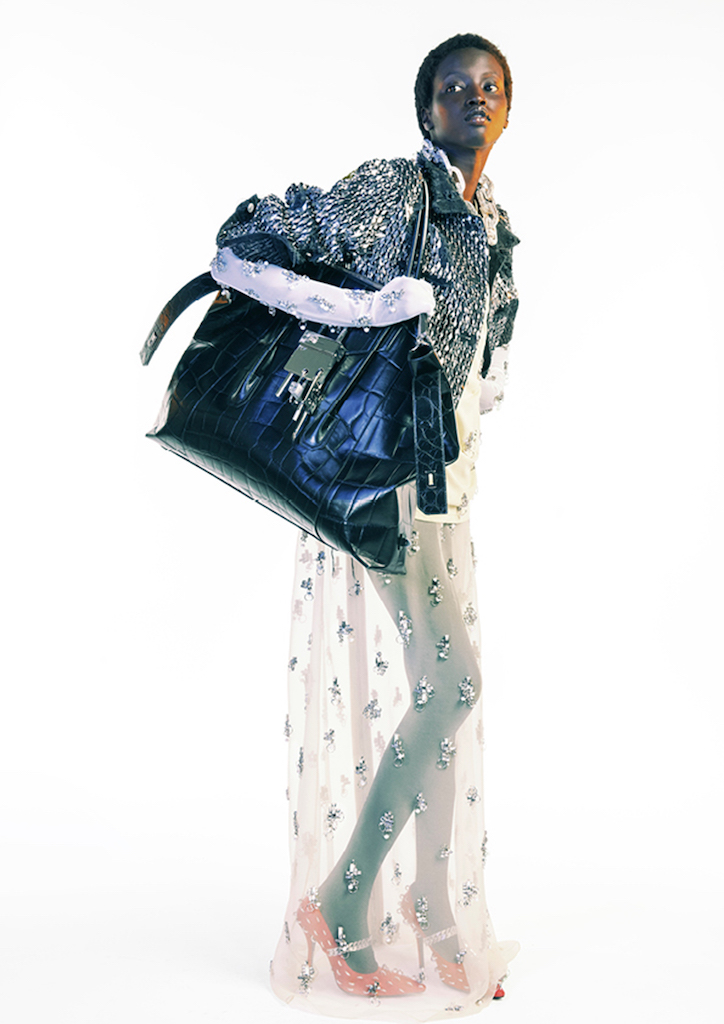 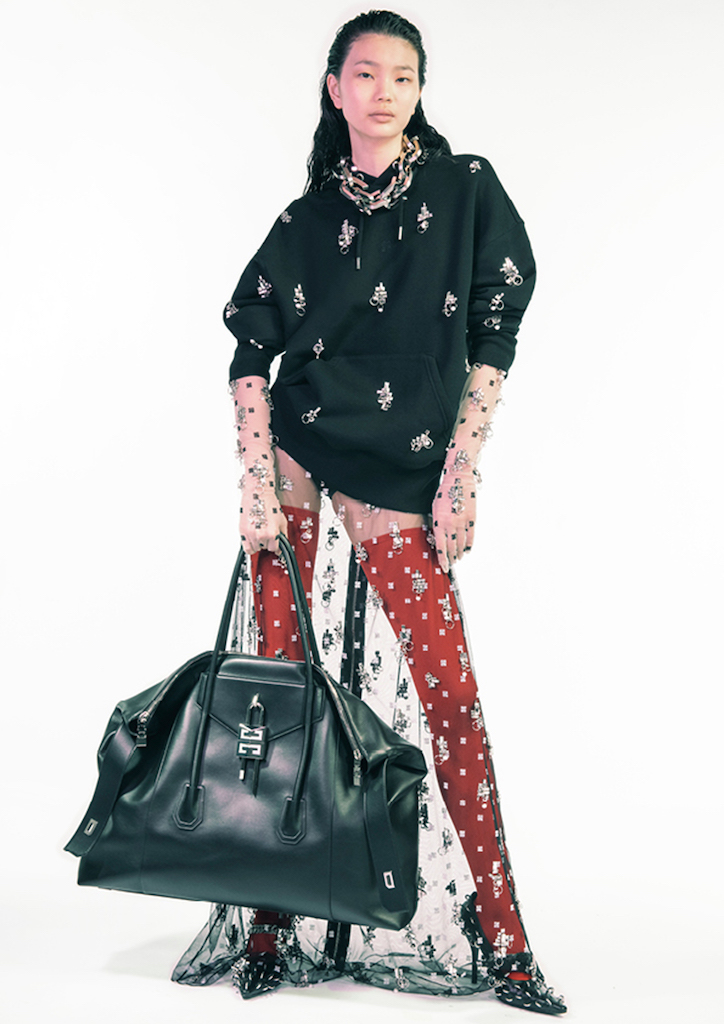 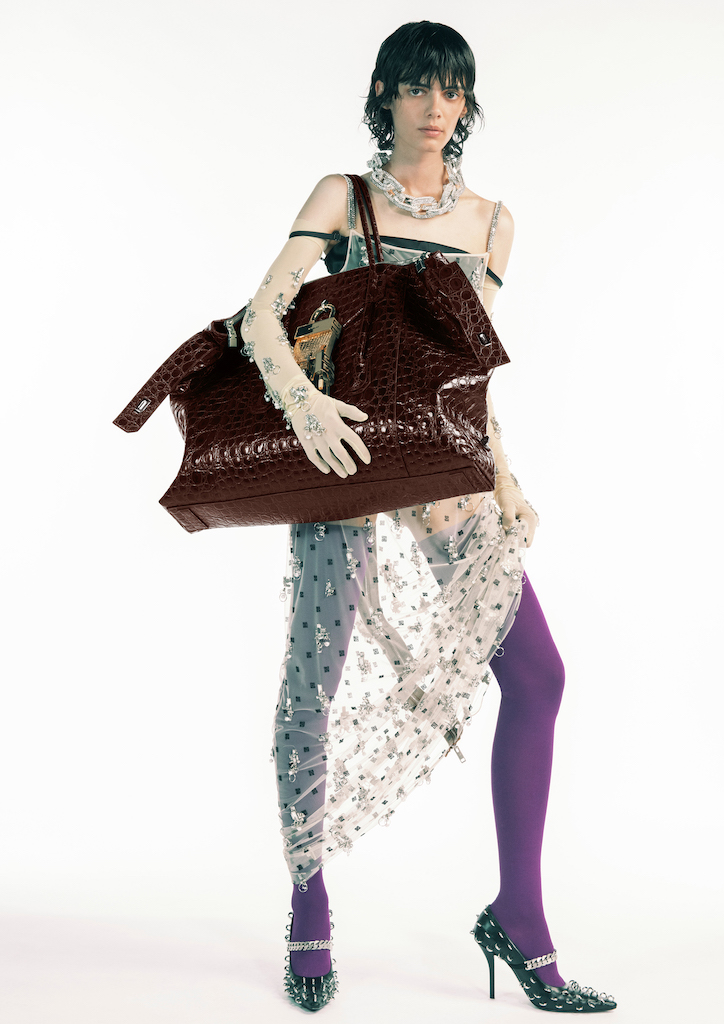 “You find the pieces of the puzzle for a collection, building it from symbols and signs, but never forgetting the reality of the person who will wear it and bring it to life. The women and men should be powerful and effortless, equal and joyful, a reflection of who they really are – only more so. It’s about finding the humanity in luxury.” Matthew M Williams, Creative Director, Givenchy.

At Matthew M Williams’ Givenchy, ‘Hardware‘ is key. Eschewing, gendered notions of jewellery and accessories, rather it is hardware that unites the women and men of Givenchy, a symbolic nexus of utility and luxury and the place where this collection began. The Lover’s Lock is a unisex object of utility, decoration, commitment and emotion; a sincere yet playful symbol of Paris – it nods to the lost locks of Le Pont des Arts – it is an object punctuated throughout this initial collection as both decoration and fastenings. It also points to Williams’ commitment to the world of Givenchy in this first proposal as the house’s Creative Director.

The Spring Summer 21 collection explores Givenchy in the form of a stream of consciousness for Williams and is a ‘sampler’ of what is to come. Begun in the midst of a pandemic and completed within two months, this is a new beginning, yet is intermingled with elements of the archive and is a utilization of Givenchy’s distinct lineage, pointing to the past, present and future Above all, there is a sense of celebration, of the people who have led Williams here and those he wants to wear the clothes. This is expressed in the images that reveals the collection, a photographic study by the creative director together with the artist Heji Shin a photographer who also gets to the heart of who a person is as much as to the clothes they wear From Hubert de Givenchy’s swathes of looped drapery, lighter than air transparencies, linear necklines and ‘Jour’ open backs, to the McQueen horn, reborn; both the classical and radical contrasts of Givenchy are embraced and shown to have always been part of the house’s history in the collection. Ultimately, it is a feeling of elegance, playfulness and pragmatism that is key to Matthew M Williams’ vision for the house.

There is a notion of evolution, both lighthearted and serious, in this play of elements past and present. From the Tryp-toe shoe and stockings, the Horn heel and hat together with a further examination of the Antigona bag, each is a play on and development of existing objects in the archive. They are joined by the new unisex Cut-out bag in its many iterations, as well as the G chains, objects that are destined to add to the history of the house and are interspersed throughout Williams’ signature technical material experimentation is balanced by the traditional, natural and opulent. From the use of a cotton Ottoman for both genders in outerwear, technical taffeta in tailoring and structured Punto di Milano jersey to evoke more pure forms in dressmaking, tradition is respected yet refined and re-contextualized. At the same time, an experiment in different densities of injected foam leads to an evolution of the slide, the ultra-comfortable Marshmallow Slide is the footwear that underpins much of the collection, quite literally providing a casual, insouciant foundation for many of the more formal looks. The study of casual archetypes continues throughout the collection, including new technical coatings of denim in both paint and resin, work that is as labour intensive as the collection’s more traditional embroideries. It is a sign of Williams’ Californian sensibility transplanted to Europe that he approaches the two sides with equal aplomb and rigour, both classicism and subversion, with a sense of ease and respect for the humanity of the wearer infusing all.