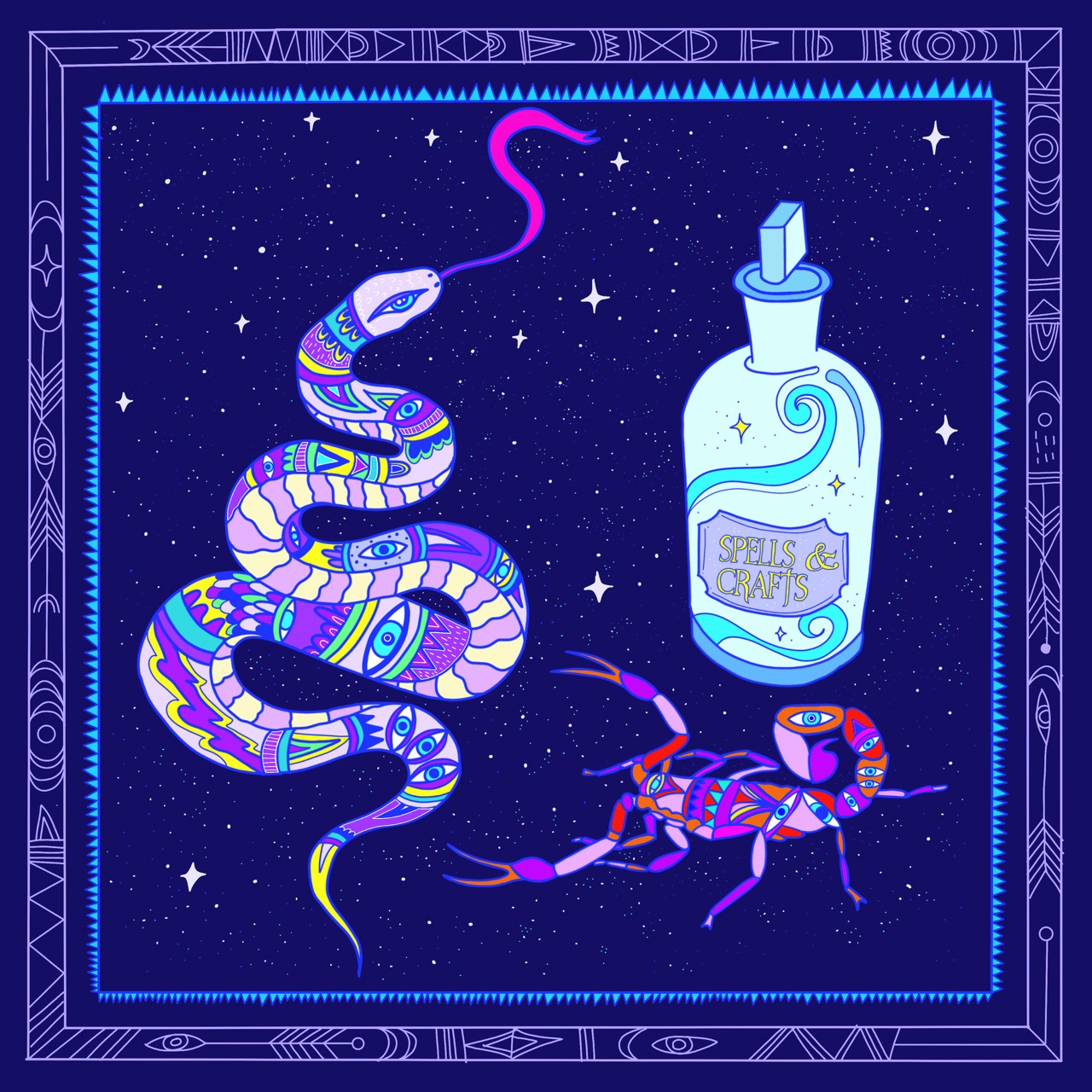 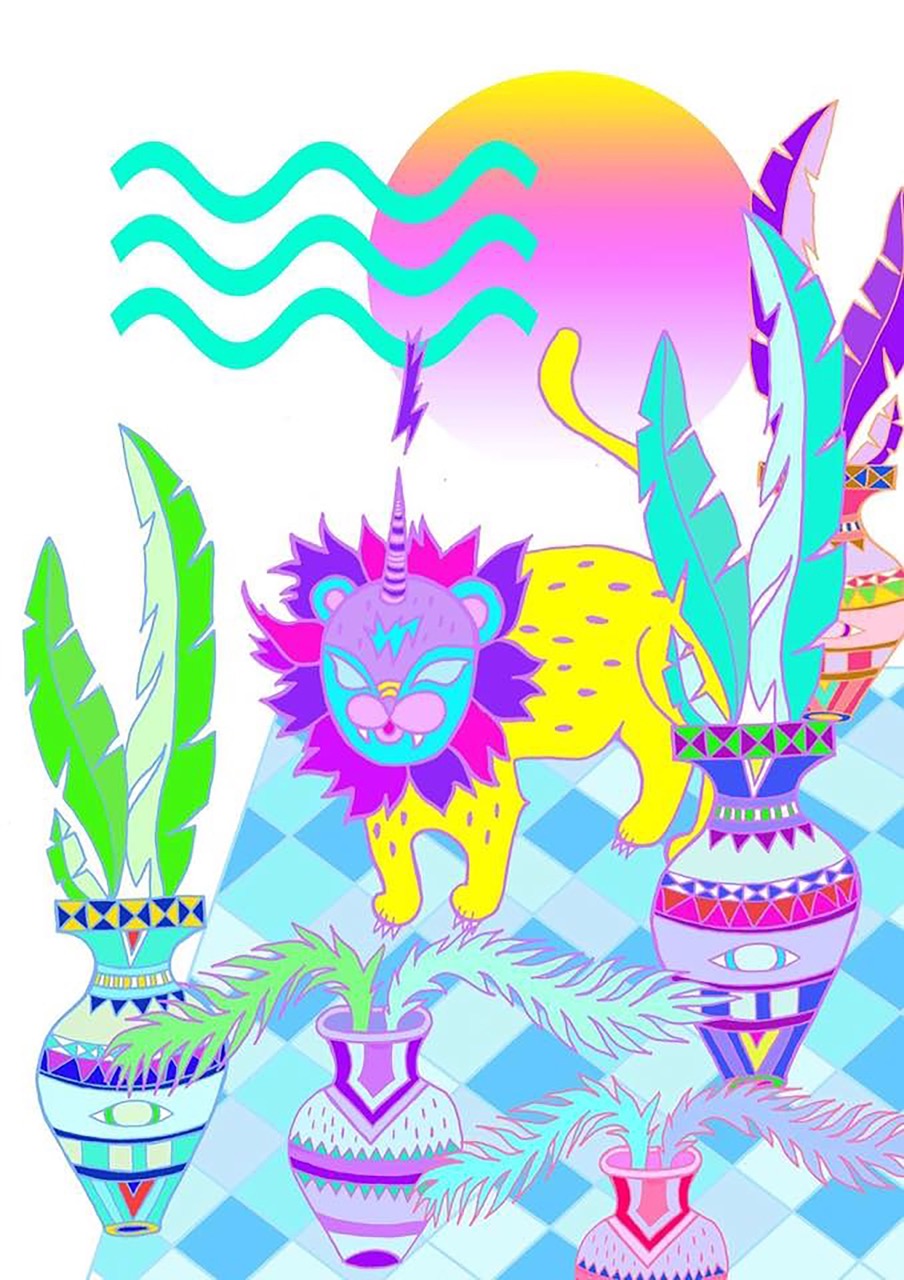 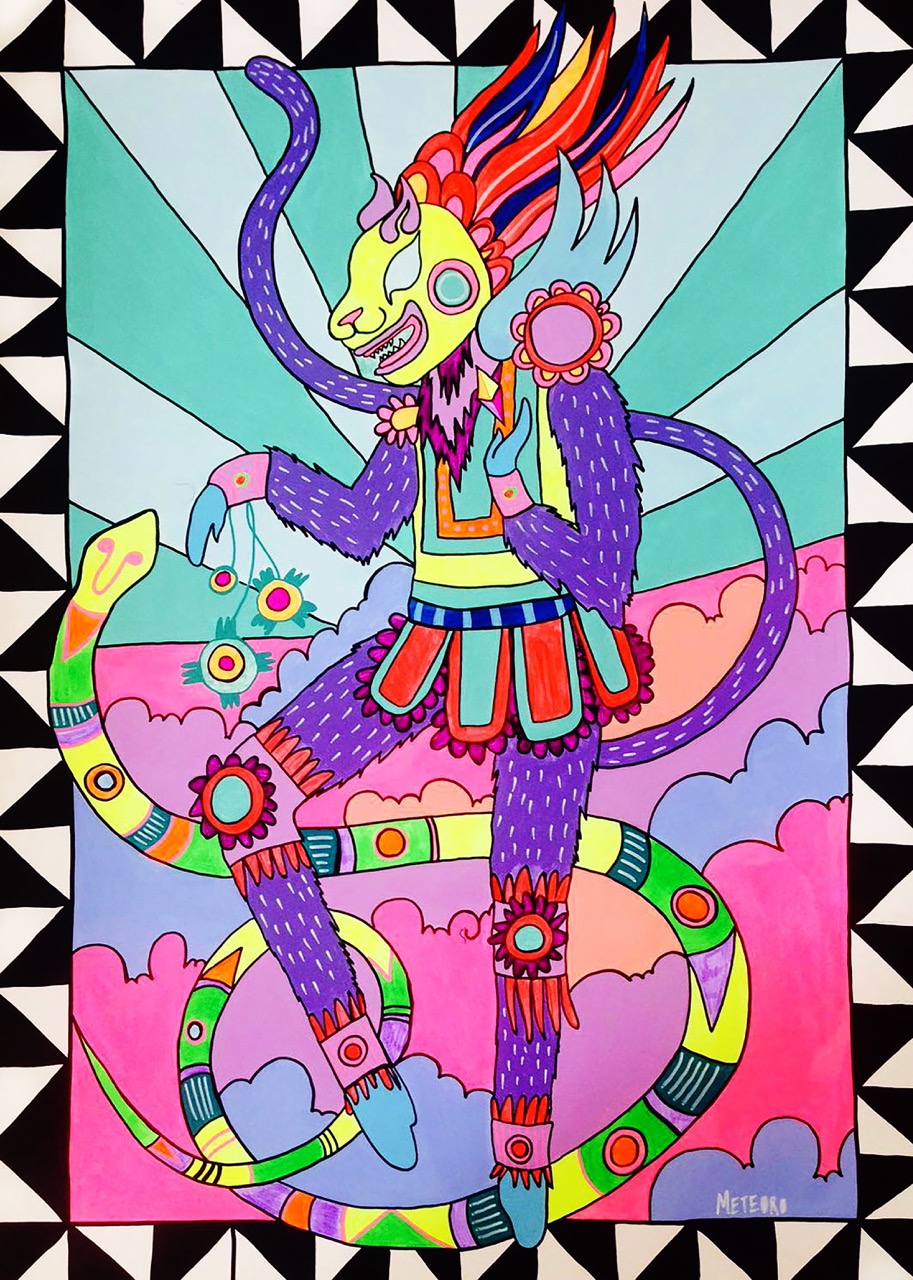 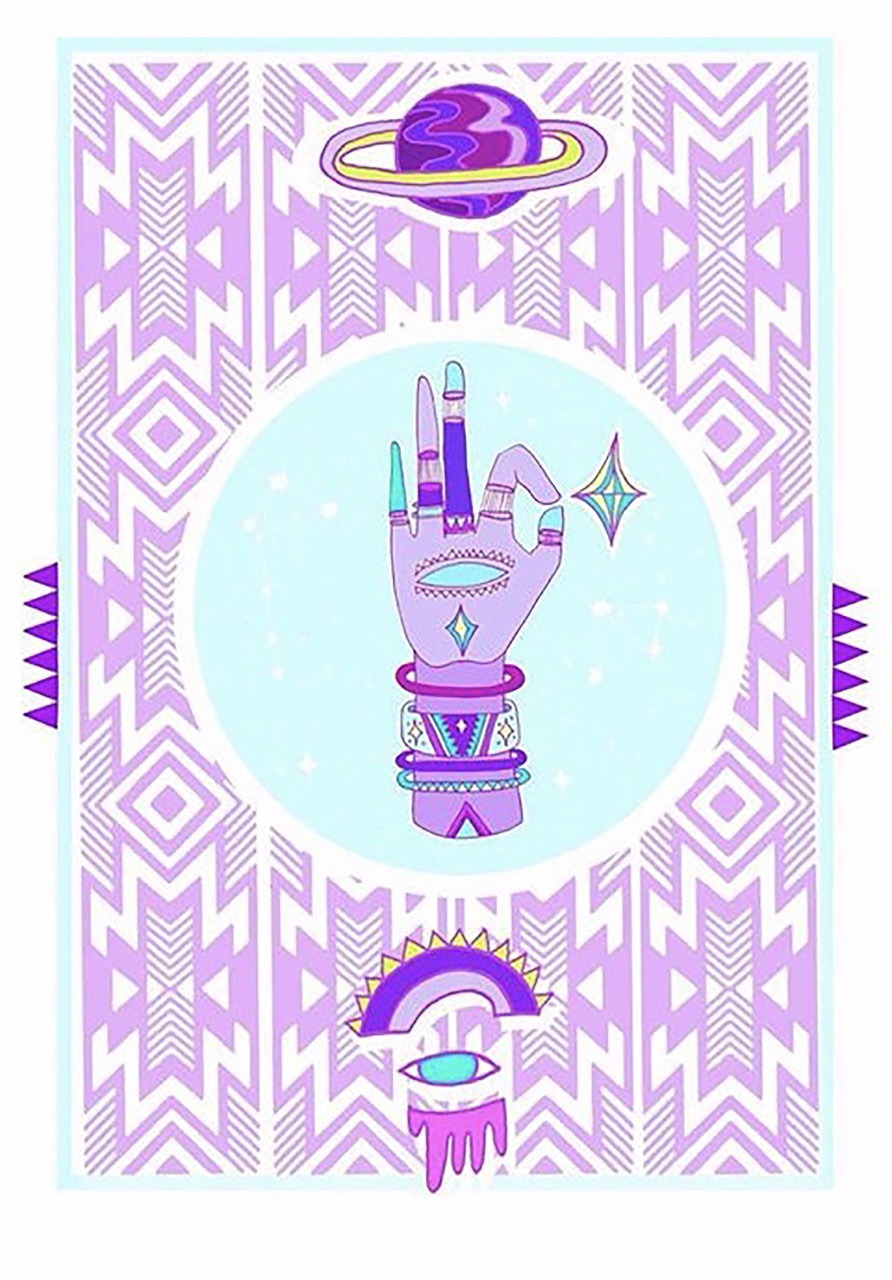 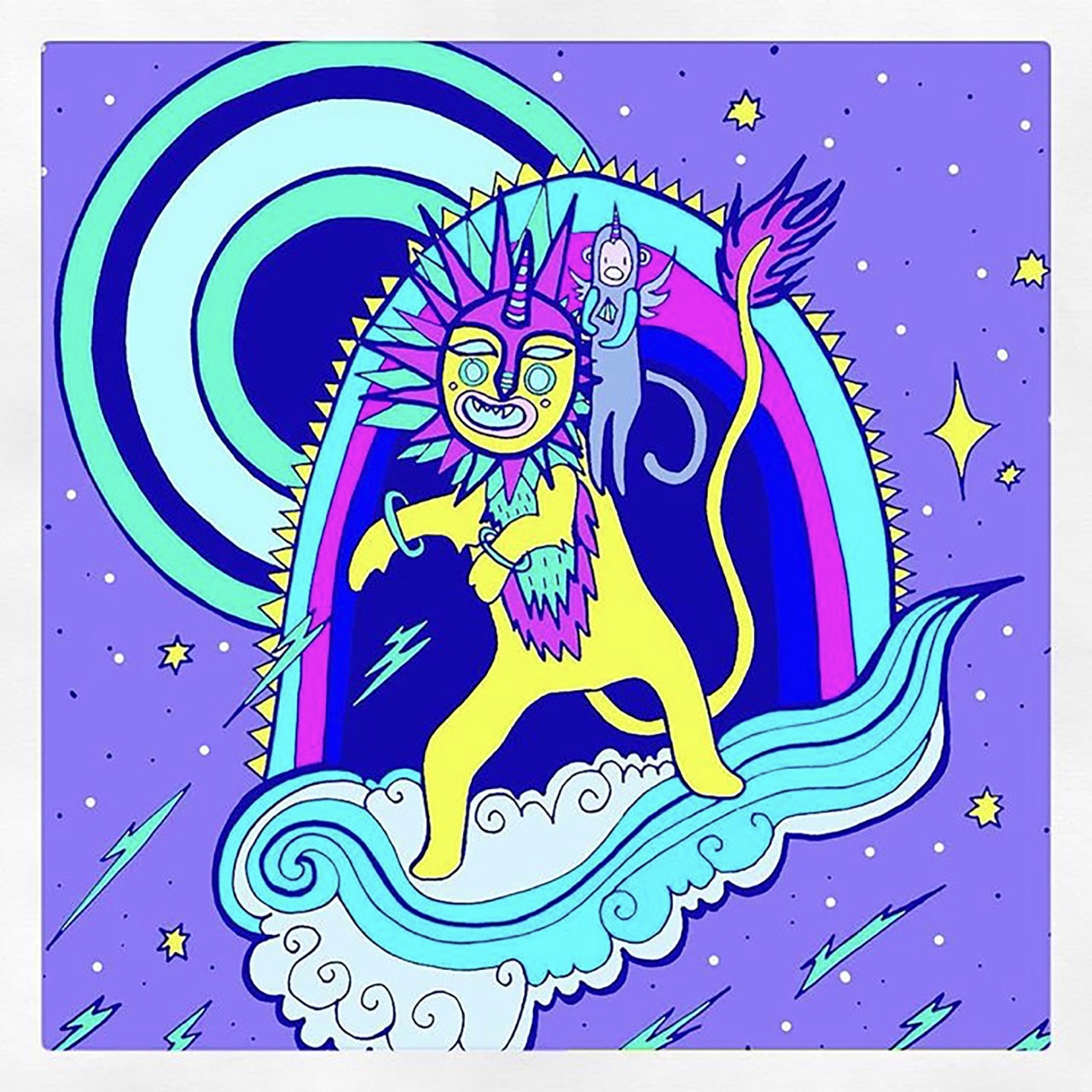 Under the sign of Aquarius, Mariana Camberos (1984), was born in Polotitlán de la Ilustración, State of México. This is the place where she grew up and the starting point for the journey that would submerge her in the depths of Latin America, where she collected in her imagery the aesthetics of ancestral cultures, under the atmosphere of tropical blood. Then, in southern latitudes, she is baptized with the pseudonym Meteoro in Buenos Aires, Argentina - where she studies fashion design and art direction for film and theater - and it seems that the appellative is a kind of omen, a prediction of what her production would be: pieces loaded with supernatural magic, characters extracted from dream worlds, fantastic creatures of mystical dimensions; crystals, planets, flowers, recurring elements in the psychedelic cosmos in which she lives and which she shares with us through her art and designs: visual arts, textiles, ceramics; because her versatility is also characteristic. Her free and lively spirit has led Meteoro to share that universe a tribute to the mystical, she confesses - in places such as Barcelona,
Copenhagen, Rio de Janeiro, San Miguel de Allende, Hamburg, Barranquilla or Berlin, where she is currently based.

How did you start?
I couldn't decide on one of my own or someone else's. Art is like music, every day I like something different depending on the mood.But if I must decide on something, one of the KAWS sculptures, is SEPARATED for example. Since I am a fan of Street art, I feel that he erases the line between galleries and the streets, and he does it with great style, this sculpture for me represents the separation of culture and individuals in a funny and ironic way for being a super pop character and sitting all sad covering his eyes, It represents a lot the tendency of this generation not to see beyond or force ourselves to don’t see. Anyway, very cute. And some work of mine cut is 4 meters towel I made of pallets in Tenerife Spain.

What themes do you pursure?
Sacred plants always call my attention and the multiverses that these can reveal to you. Mystical animals and geometry also fascinate me. I like to combine these themes between ancestral and divine. Here in Mexico there is a god called Xochipilli, is my favorite because, just to begin with, he does not have a literal gender, it means literal prince of flowers, and he is the god of the arts, music, dance, and medicine or sacred plants (psychedelic plants) It fascinates me to think that in ancient times they already mixed all this and that art was considered medicinal when in our contemporary society this importance has been lost.

Describe a real-life situation that inspired you?
Seen people enjoying music and art as in a festival or a good concert. The energy that all together in unison we can generate dancing is impressive and beautiful. It inspires me a lot. I think music and festivals are our contem-
porary rituals and DJs are shamans.

What jobs have you done besides being artist?
Waitress, fashion designer. Nanny. Bartender.

We see your Art and Visionat Parties with Daytrips, tell more about it?
Yes, as I was saying before, I love the music scene very much and throughout my career, I always worked with musicians making special outfits for shows and graphics until lately one of my dreams has been doing stage design. It seems to me of crucial importance to always accompany the music scene with a coherent visual message that helps to touch the soul of the individual and make it have the greatest experience.