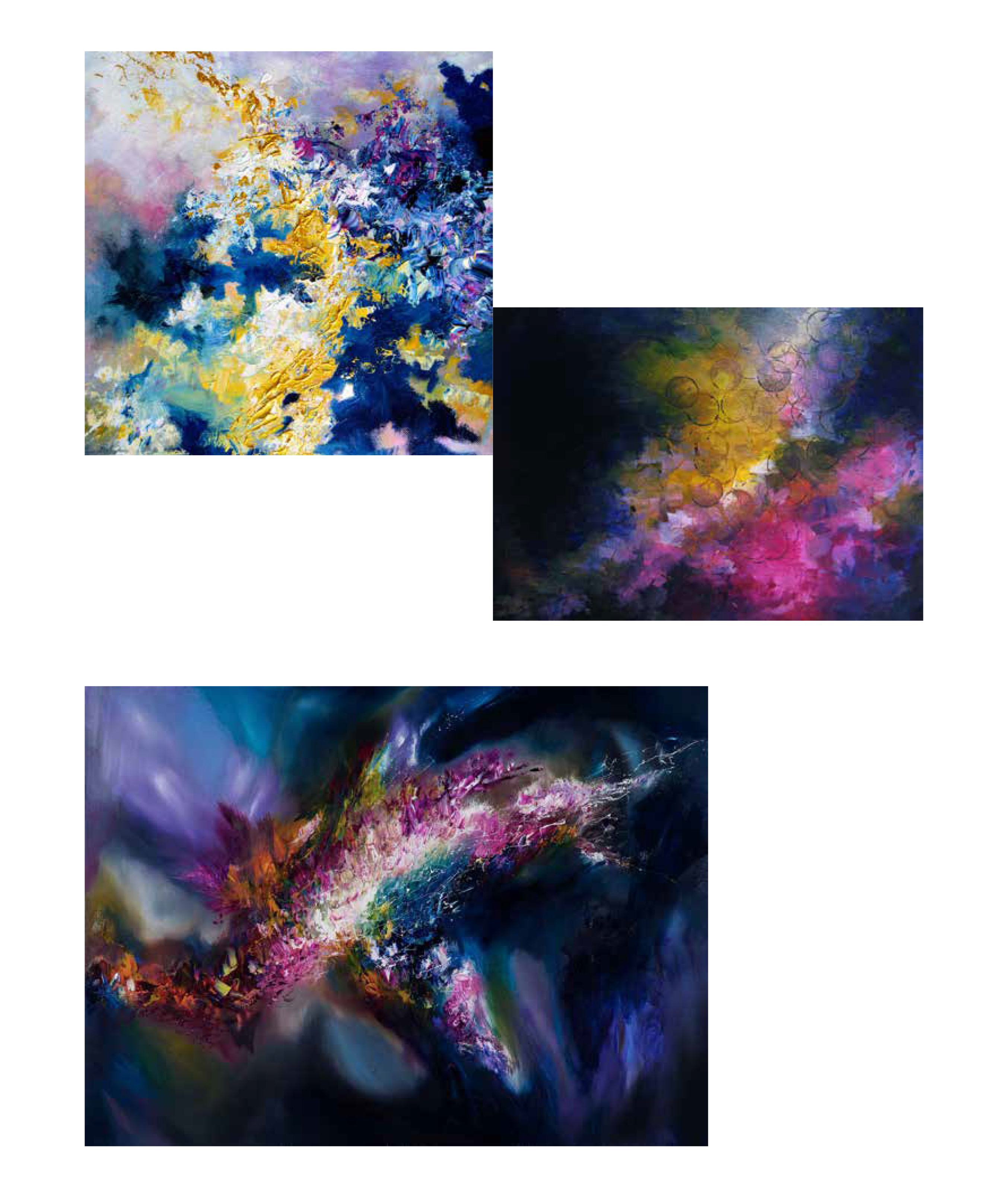 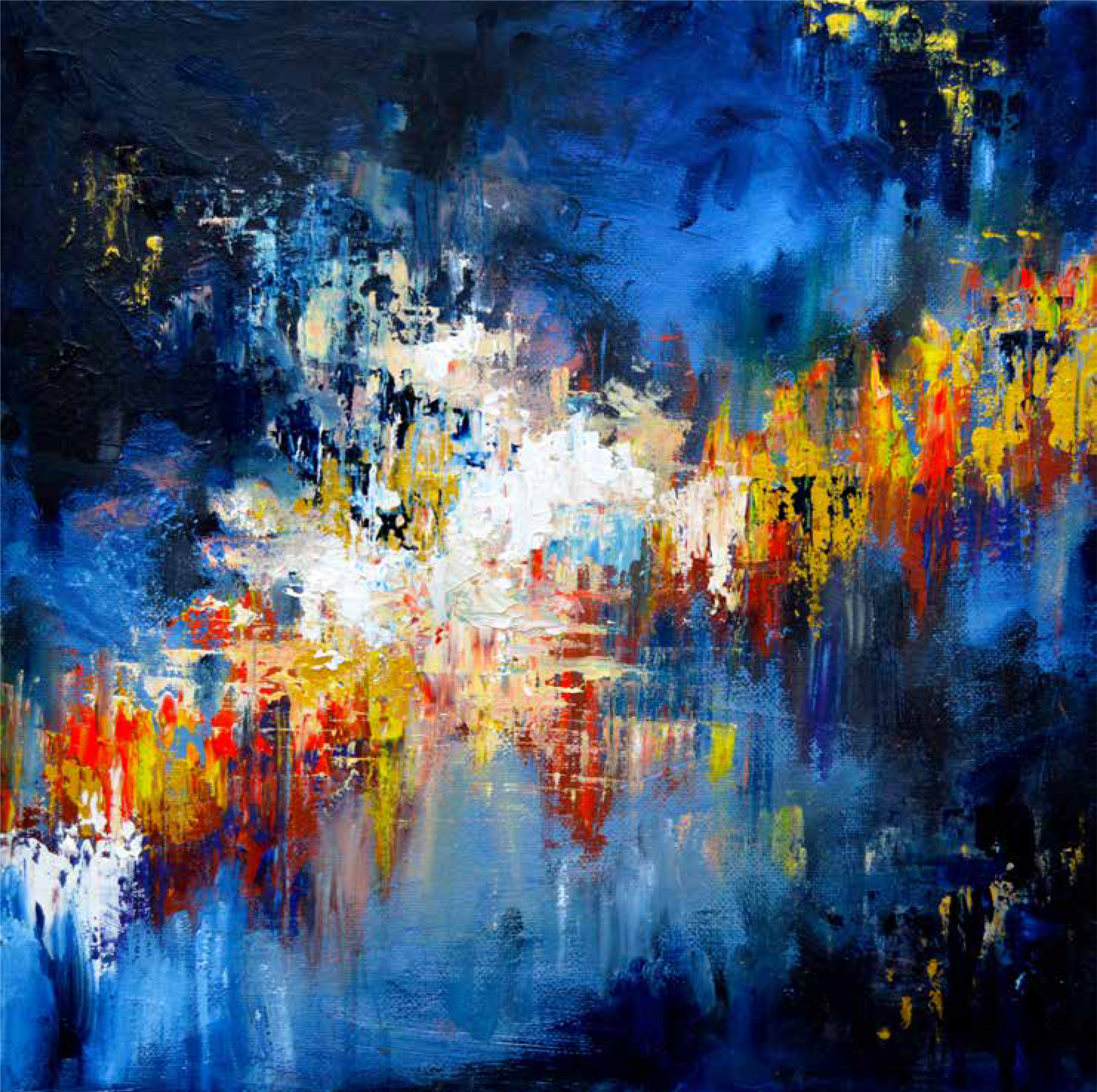 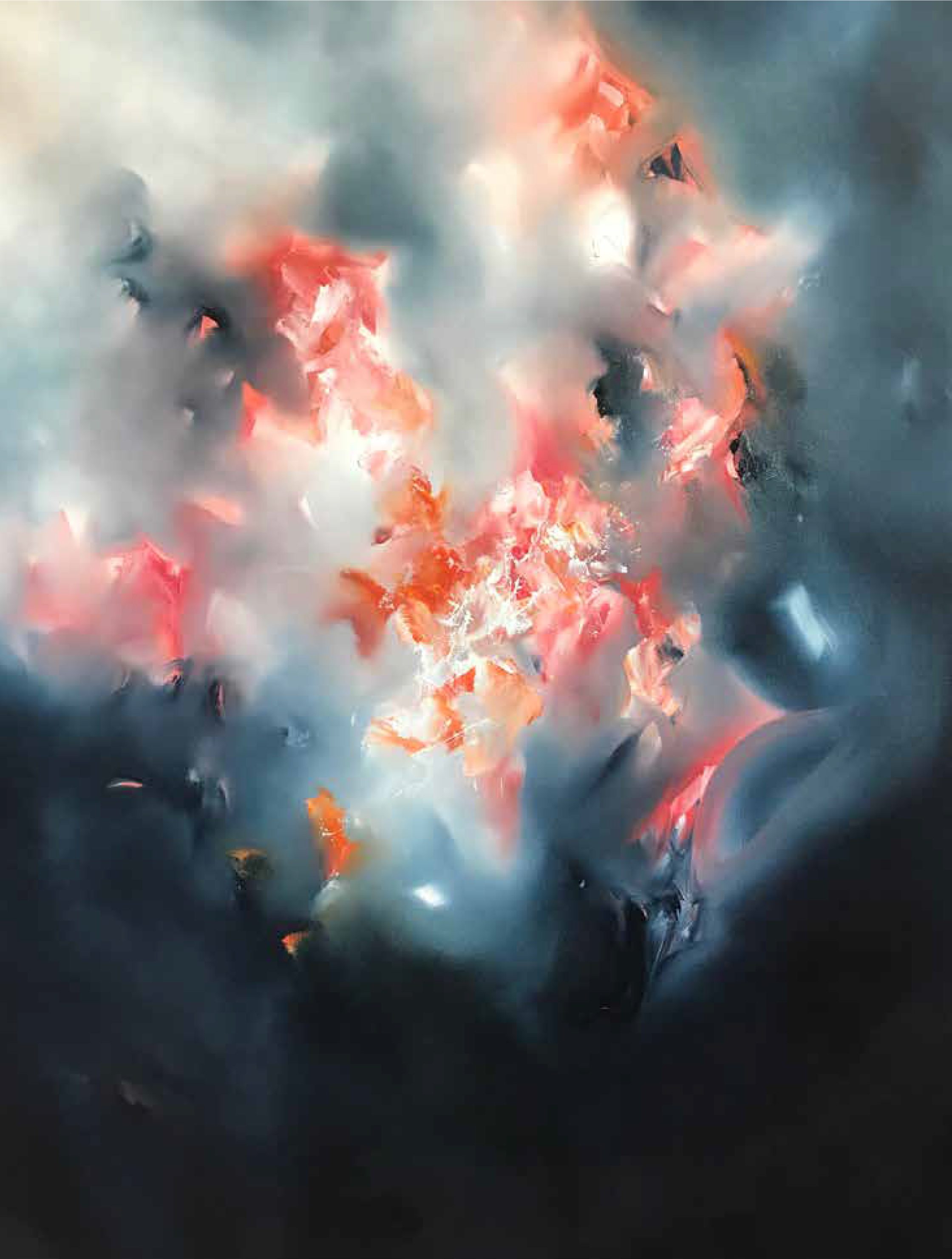 Melissa McCracken was born and raised in Kansas City. Growing in a musical environment, she has always seen colors in music. Actually, Melissa could see colors in letters, sounds and place the days of the weeks in certain spots around her body. In her late teenage years, she turned to her family and asked, “You guys see colors in music too, right?” Of course, the family answered with a baffled “No”. That is how Melissa figured out she had a rare condition called synesthesia. Synesthetes have, as she would say, a “cross wired brain” which makes connections between two senses that would normally be separated. In her case, she could see shapes and colors as she listened to songs. With a great desire to explain what she was seeing, Melissa turned to art and started painting what she saw.

How do you decide that you’re going to paint a song? Is it something you feel or is it something that you keep from your childhood and decide to paint? It is kind of a combination of the two. When I started painting music, it was more based around memories of music. My oldest brother is very musical, so he would play Jimi Hendrix on his guitar or he would listen to Stevie Wonder and those visuals were always stuck in my head throughout my entire lifetime. They were the first ones to get out of my system. I painted those to begin with, so it was just the older stuff that has always been around. Then, I got to the point where I was kind of on the track to put what I hear into a visual and it was more sporadic. I would hear a new song and think “Oh I love that! It feels emotional and deep and saturated”, so it became a more obvious inclination for what I wanted to paint rather than the emotional connection.

I’ve heard that you like Jazz music, which I think is great because I get to see some of the songs I like in your paintings. For example, it was a great experience to look at your represen- tation of the song At last by Etta James while listening to the it. Apart from Jazz, what would be your favorite kind of music to paint? It kind of shifts. I like the electronic sound scapin music, I think it is interesting. For instance, I love James Blake and Frederick Ocean and Radiohead. I feel they have very crisping clear sounds alongside these “whale like” sounds on the background for some pieces. It gives a lot of dimension to the work that I feel is obvious to translate, there is a lot of distinct bright colors in it and it creates a really concise picture which is really interesting. As far as painting goes, I always gravitate towards that kind of music.

Talking about those “whale like” sounds, I was wonder- ing: does the rhythm influence the colors? If you hear a drum, will you see something? Are the rhythm and the notes mixed together in the picture you see? Yes, it is kind of hard because it is such an intuitive thing that, part of the time, I feel like I can define it and then I think “wait no, it’s something else”. It is like describing a memory or something, it kind of fades in and out. As far as a drum, for example, which is just inherently a deep dark bubbly color, I do think that a lot of it is contextual. That is why each painting is more of a color skim rather than just random colors all thrown together, because there is not a des- ignated mapping. If we could say that this type of instrument has this color and this shape, and these notes change the tone of what that color is, then I think it would be easier to map. I feel like each of these instru- ments plays into the song as a whole. I think it’s all relative to what the rest of the music is doing.

So, you listen to music multiple times. Is this how do you proceed in creating your paintings? Do you also listen to the song while you’re painting it? I have tried different ways of doing it. From the beginning it was memory, so there was a much steady refer- ence because what these songs look like was so embedded in my mem- ory. But if I get commissioned for a piece, I will have to listen to that song over and over again to really pick up on the nuances in it. It can be helpful to listen to it on repeat, sometimes it kind of makes you go crazy because it’s four minutes on repeat over and over again! (laughs) I have tried to listen to other music, but if I do that, it influences the painting that I am working on too much and then it goes into the wrong direc- tion. Lately, I have been listening to podcasts because I feel like that gets my mind focused on something else. Therefore, the flow of what I’m trying to do will come out more easily without having an active engage- ment with it, so it’s not me painting things down too much or being too literal. It is a more subconscious way of representing the music.

Going back to synesthesia, lately we hear a lot about how mental conditions can be a handicap for many people. That does not seem to be your case: you have been confronted to awkward moments in your life, but has it ever been negative in your life in other ways? No, because I didn’t realize I had that before I was 15, so that entire part of my life I have been to that point. I wasn’t even curious about it, because it felt so obvious. It has never been kind of a jarring thing to me and since it’s not jarring then it does not get in the way. It is just another sense. The only thing I can say is that it can mess with my memory a little bit. It adds another association so it can be helpful but at the same time it can be bothering. If I meet someone, I know that their name is blue. For some people they would know that their name starts with and A, so they can go down the list of A names. As for me, if their name is blue it can be an A name, it can be an F name, or a dark E! That is the only hindrance in having synesthesia in my life. Also, I can get songs stuck in my head based on their color and I cannot communicate that to people. I would be like “What’s that purple and orange song by jimmy Hendrix?” and no one could be like “Oh, I know what you’re talking about!” It’s a little isolating in that sense, but it has never been a problem.

If some people have the same form of synesthesia as you do, can they hear the same colors? Everyone that I’ve met experience different colors. Sometimes, I post something and someone who has synesthesia would comment on it, and they would be like “Mine looks just like that!” or “Mine is completely different...”. And they would say “my Mondays are blue and not pink”. So, I think it’s a completely arbi- trary connection. It is whatever association we decided to make and two synesthetes seeing the same thing on certain songs would essentially be just a coincidence.

And it is not limited to music, right? No, synesthesia expands further than just sounds and letters, or days of the week. Anything sequential will be associated with my senses. I remember when I was little, I would be studying a sheet of paper and I had that association. My mom would quiz me, and I would remember where specifically on it was. It’s like my brain wants to have a setpoint about things that.

What’s the next song you’d like to paint? Ouh, that’s tough... Lately I have been listening to James Blake. He came out with a new album and I thought about that. But I do not think I will be painting any of those new songs because I have painted so much of his music, I feel insane. I really don’t know. It is exciting to get introduce to new type music, people will suggest new stuff and I’ll run with it and see what comes of that!