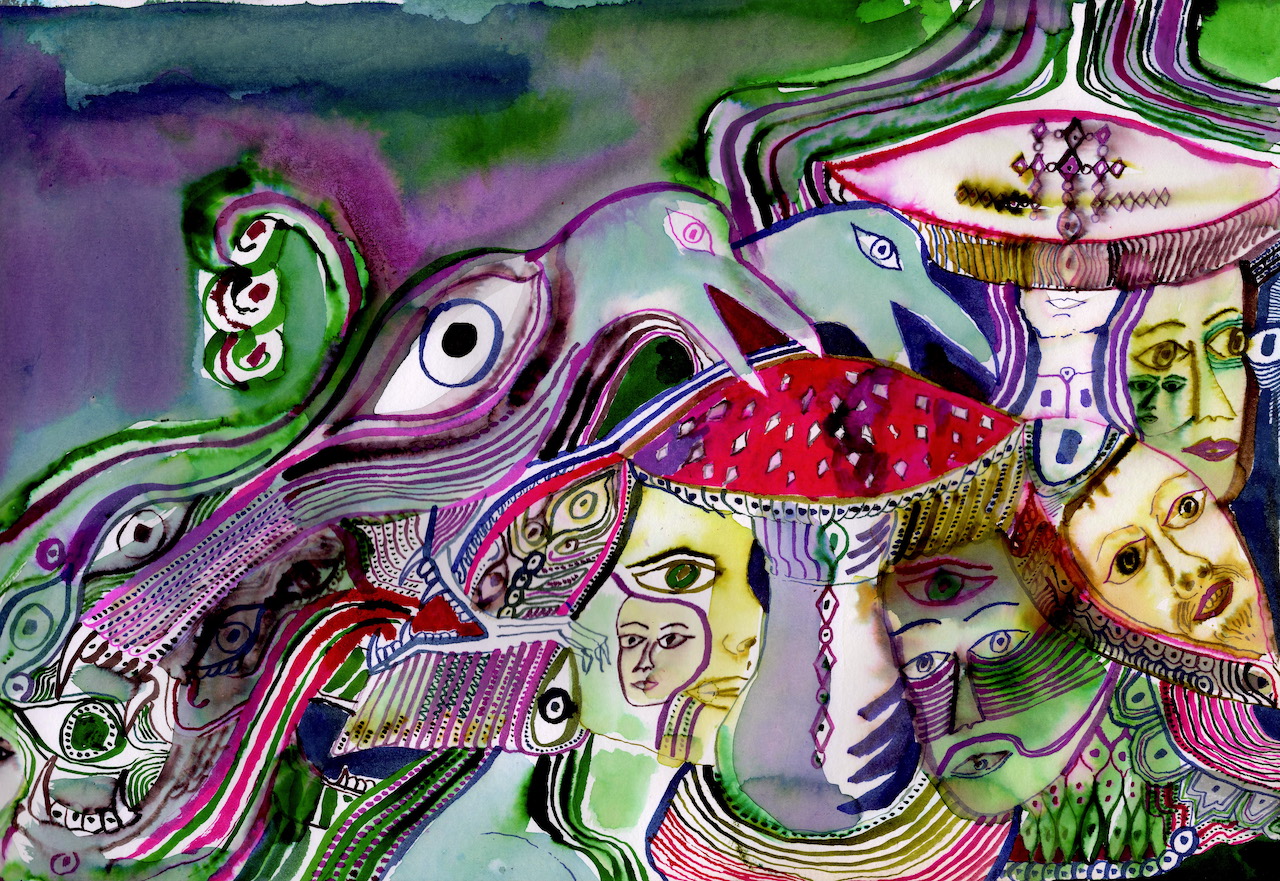 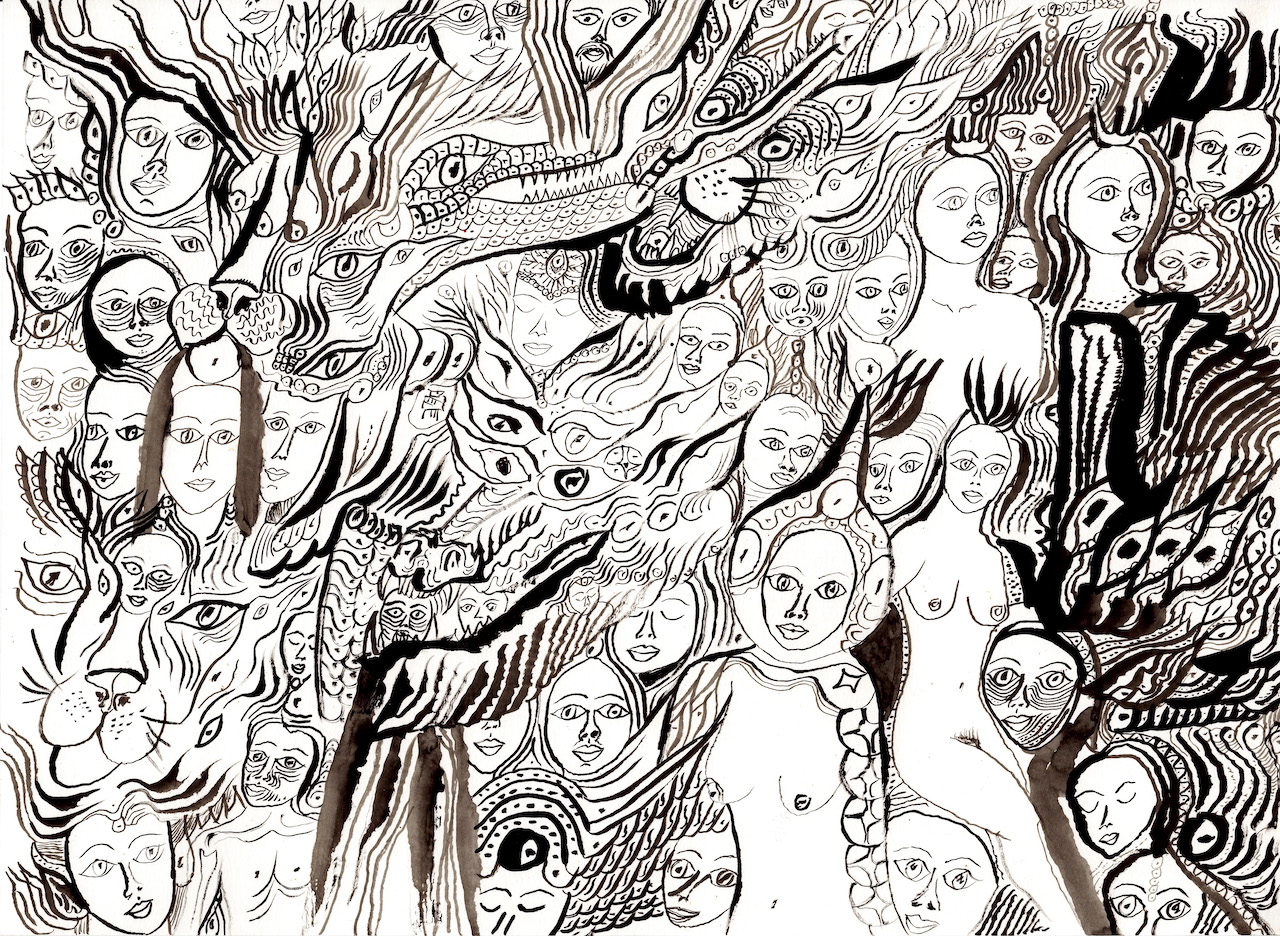 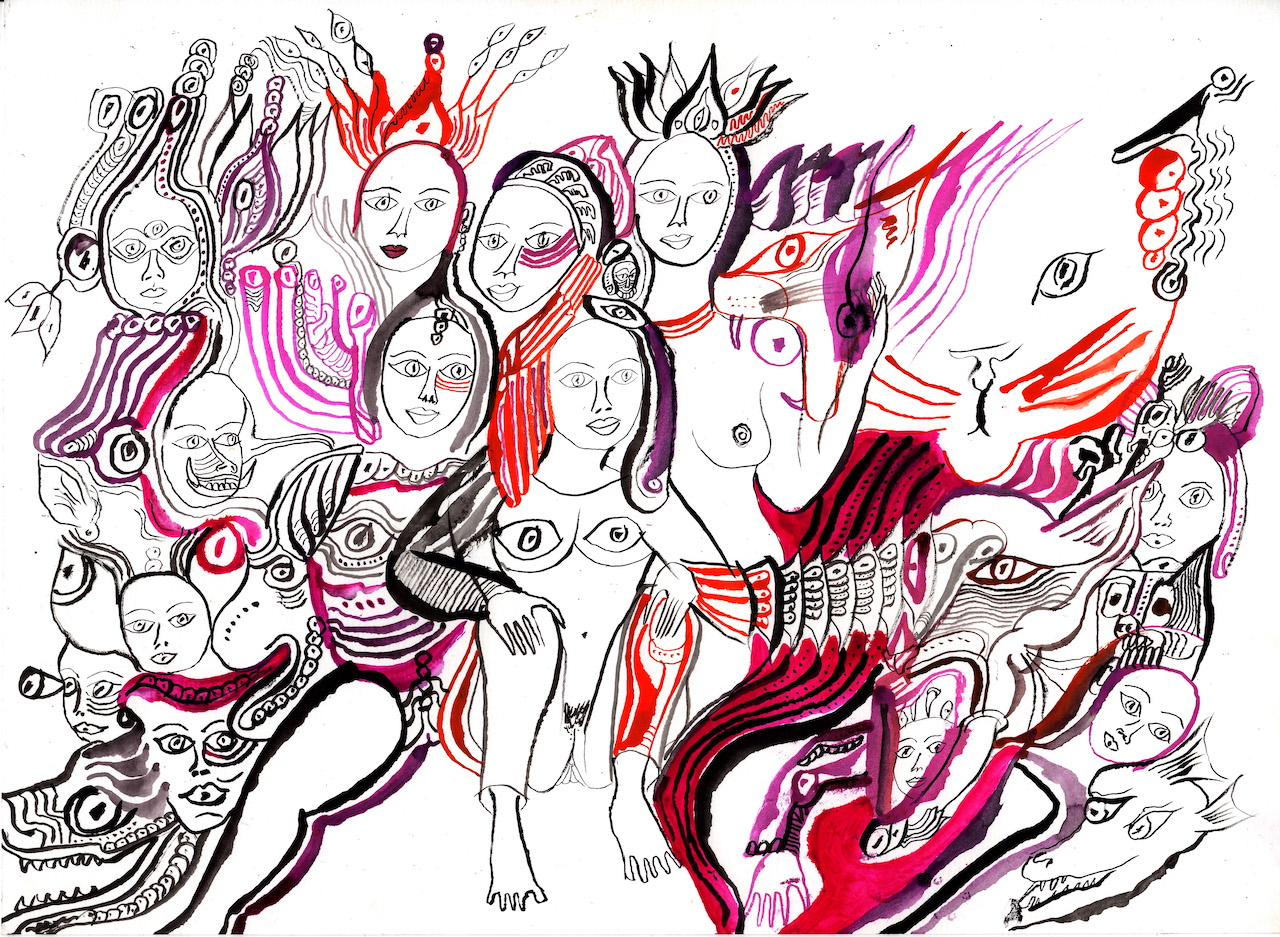 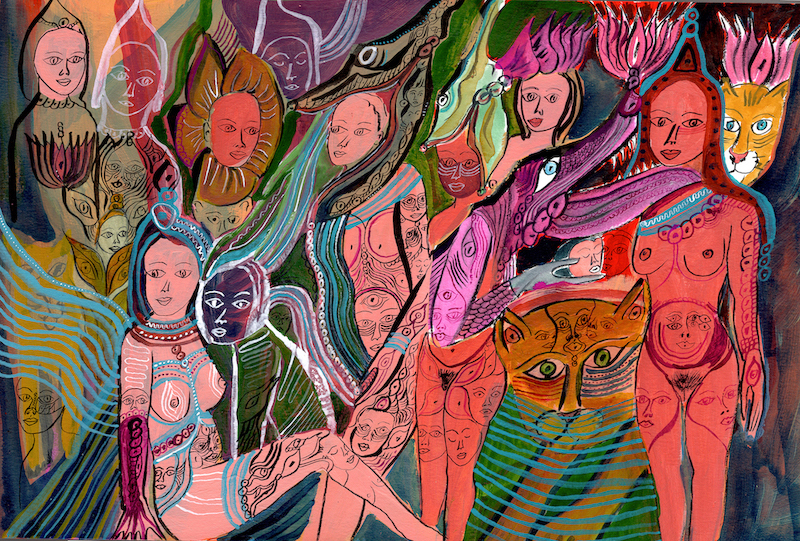 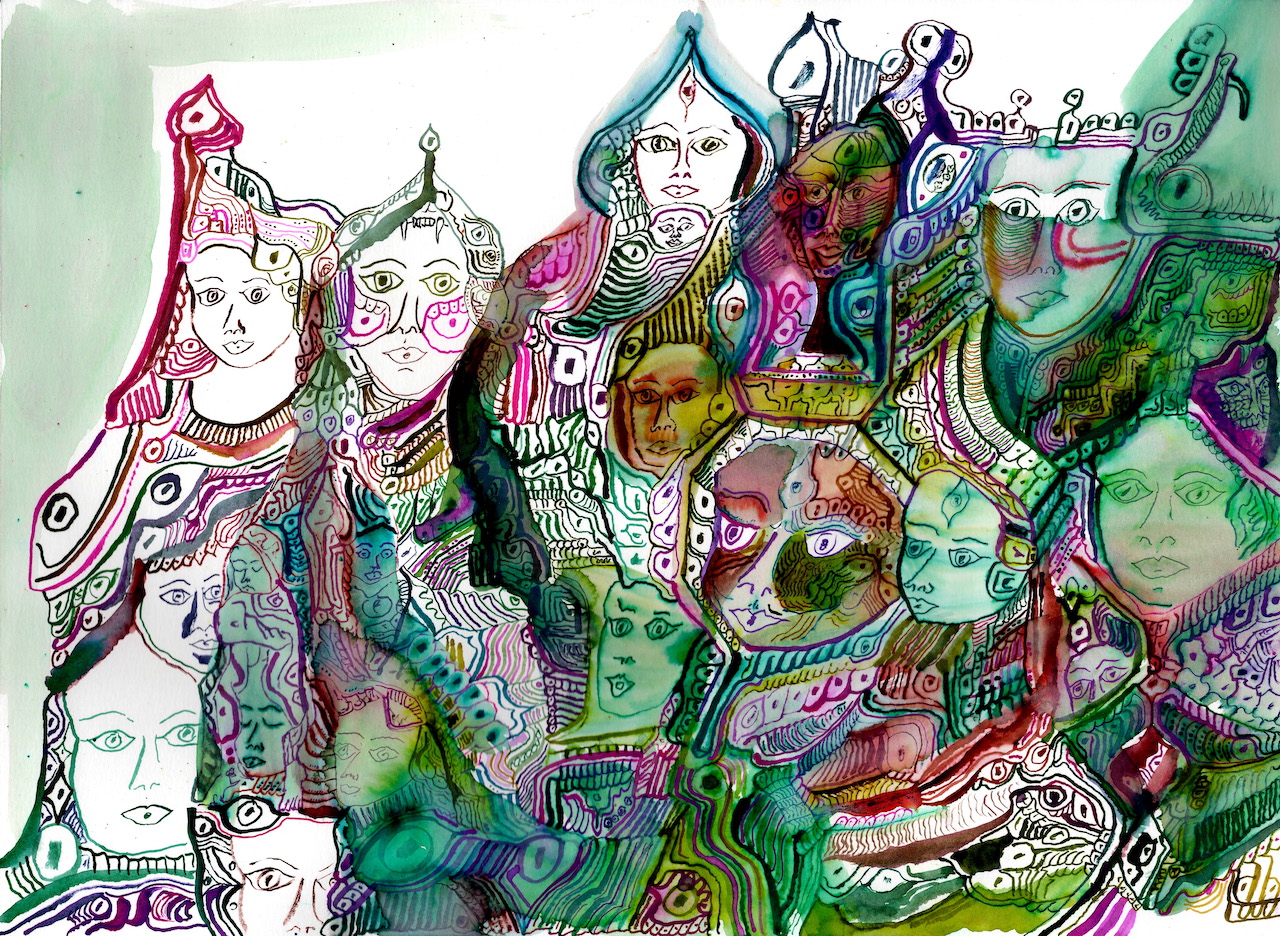 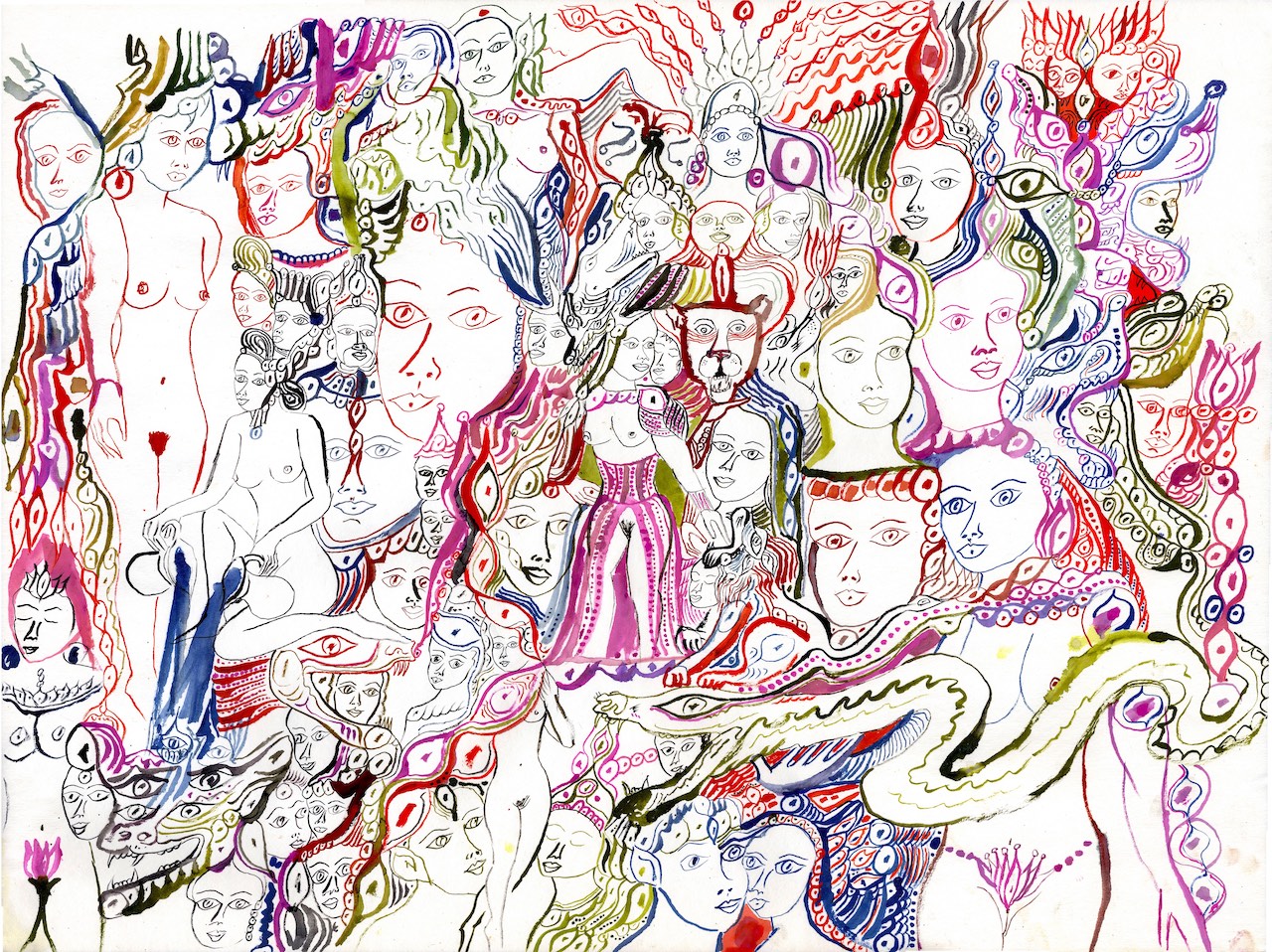 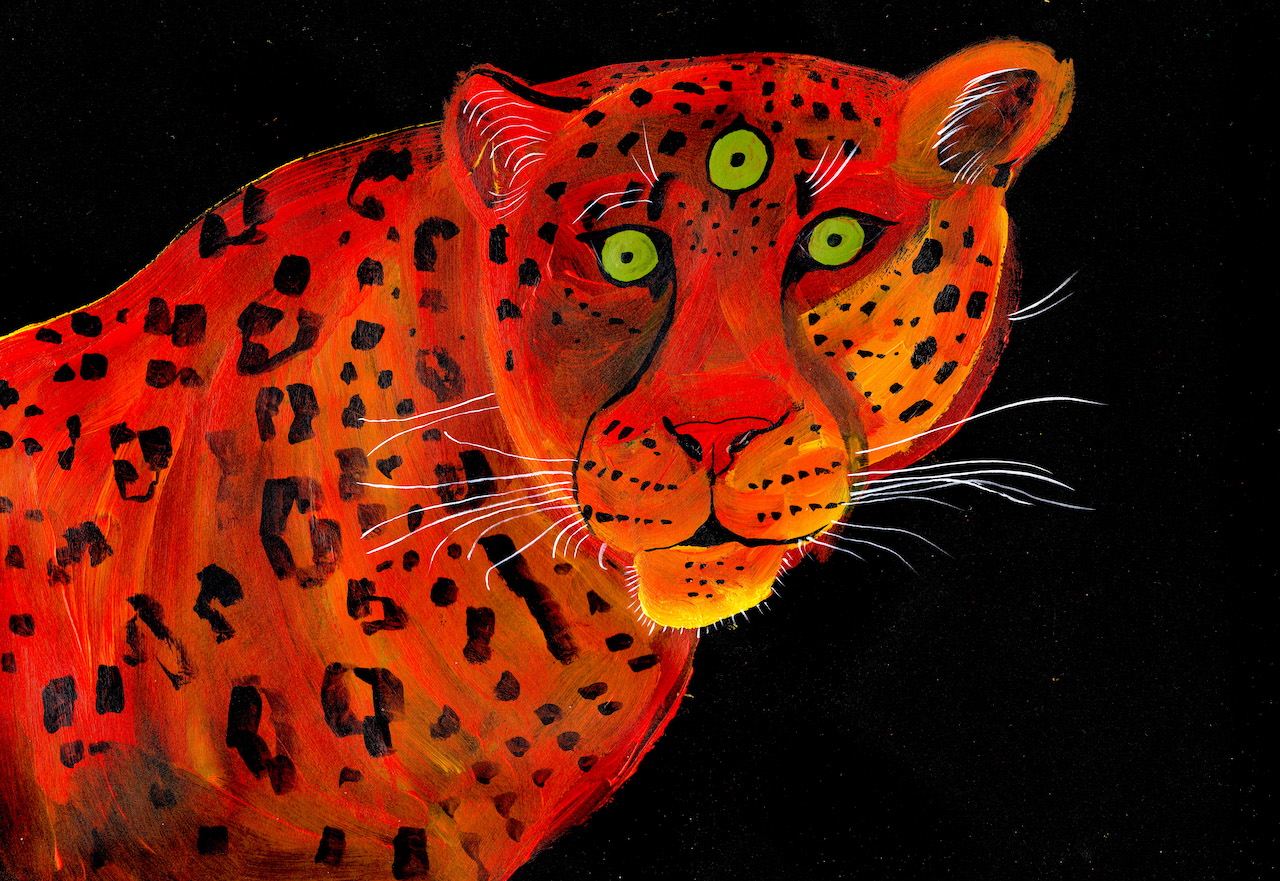 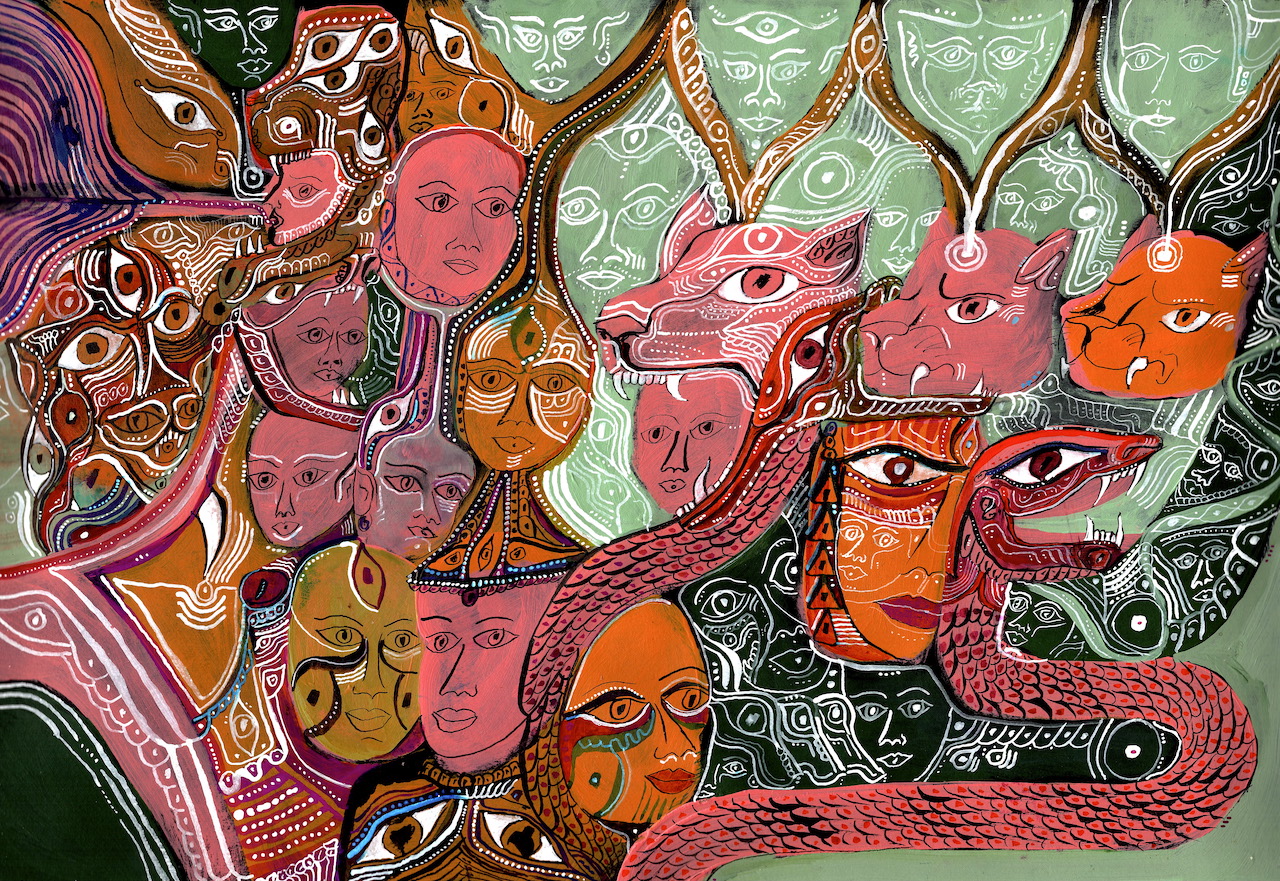 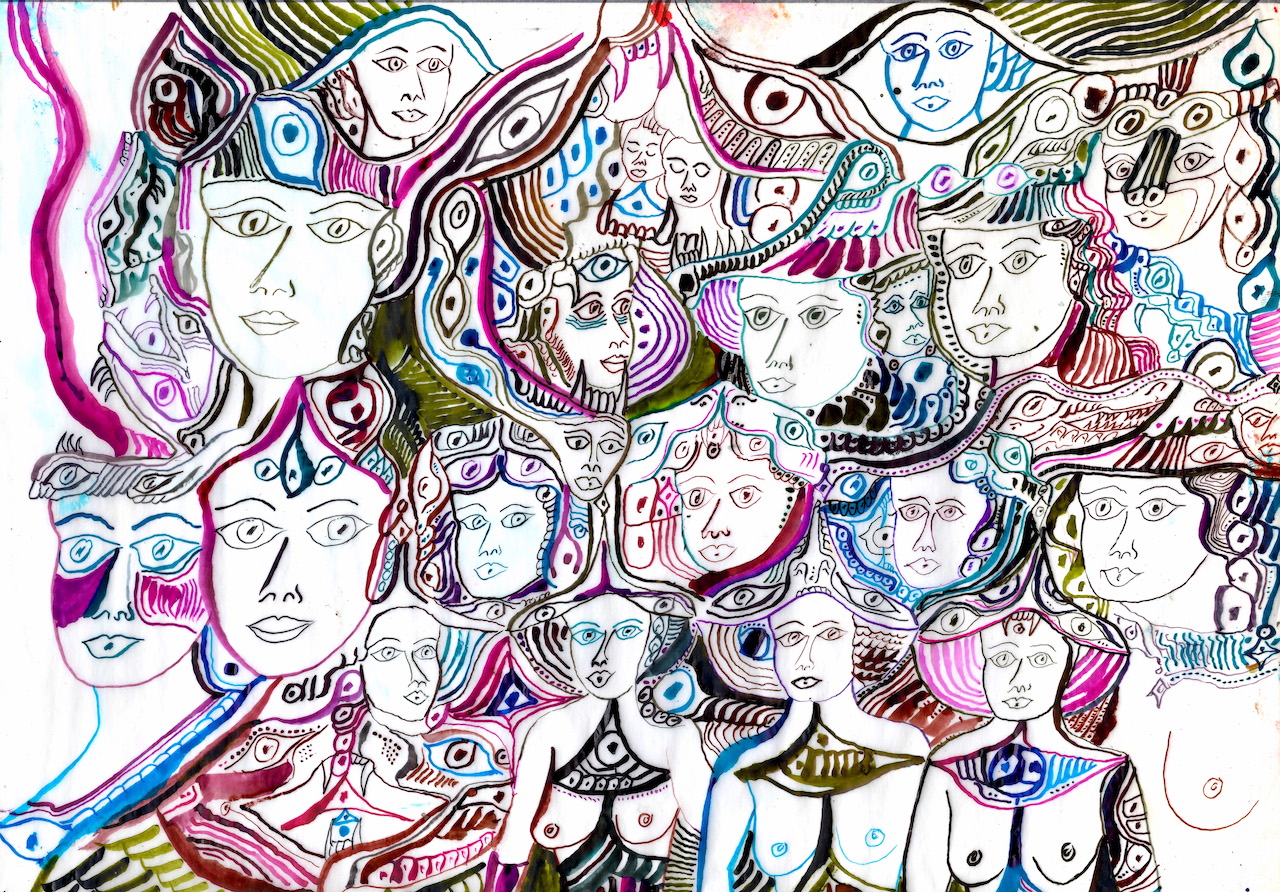 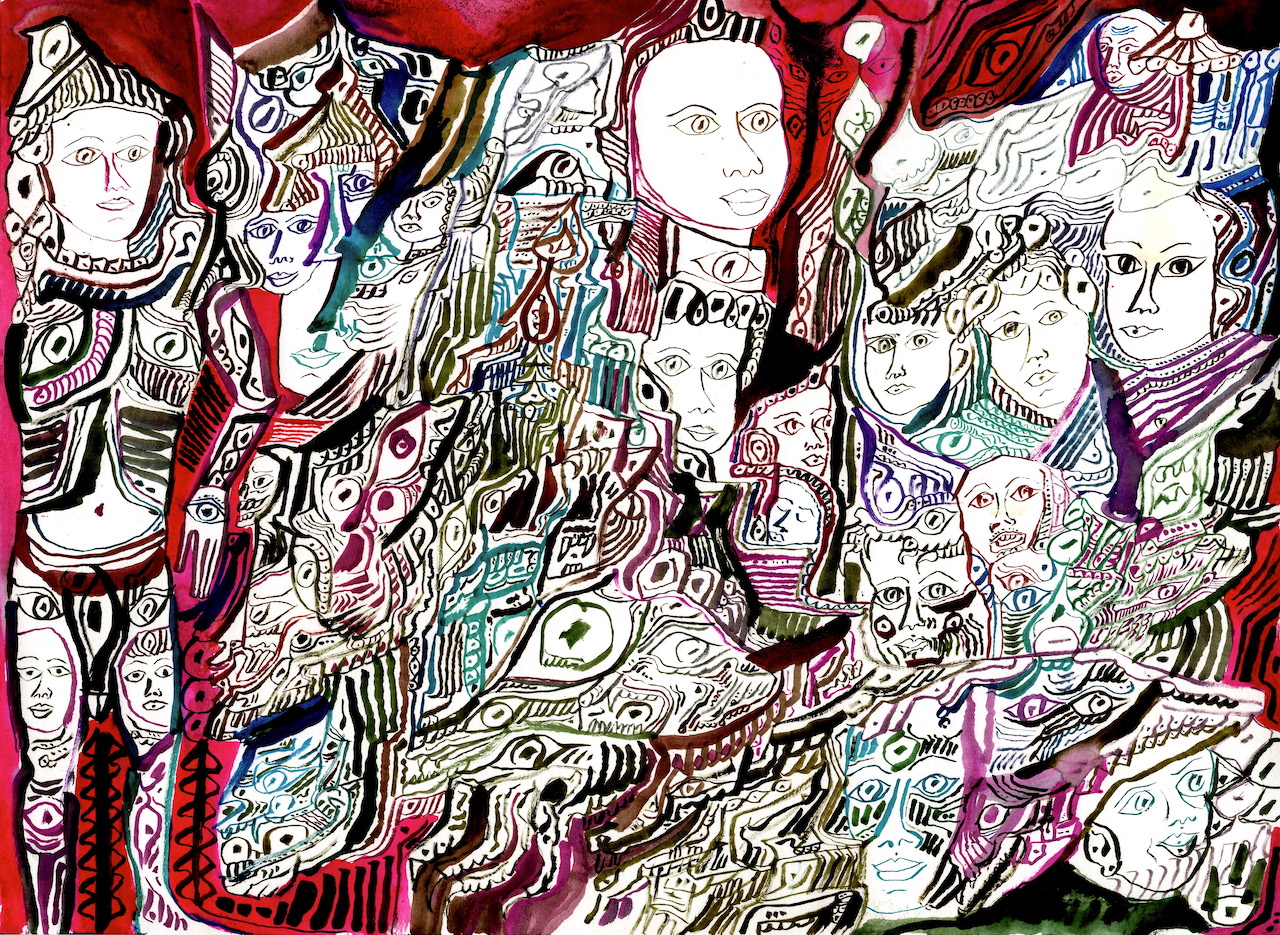 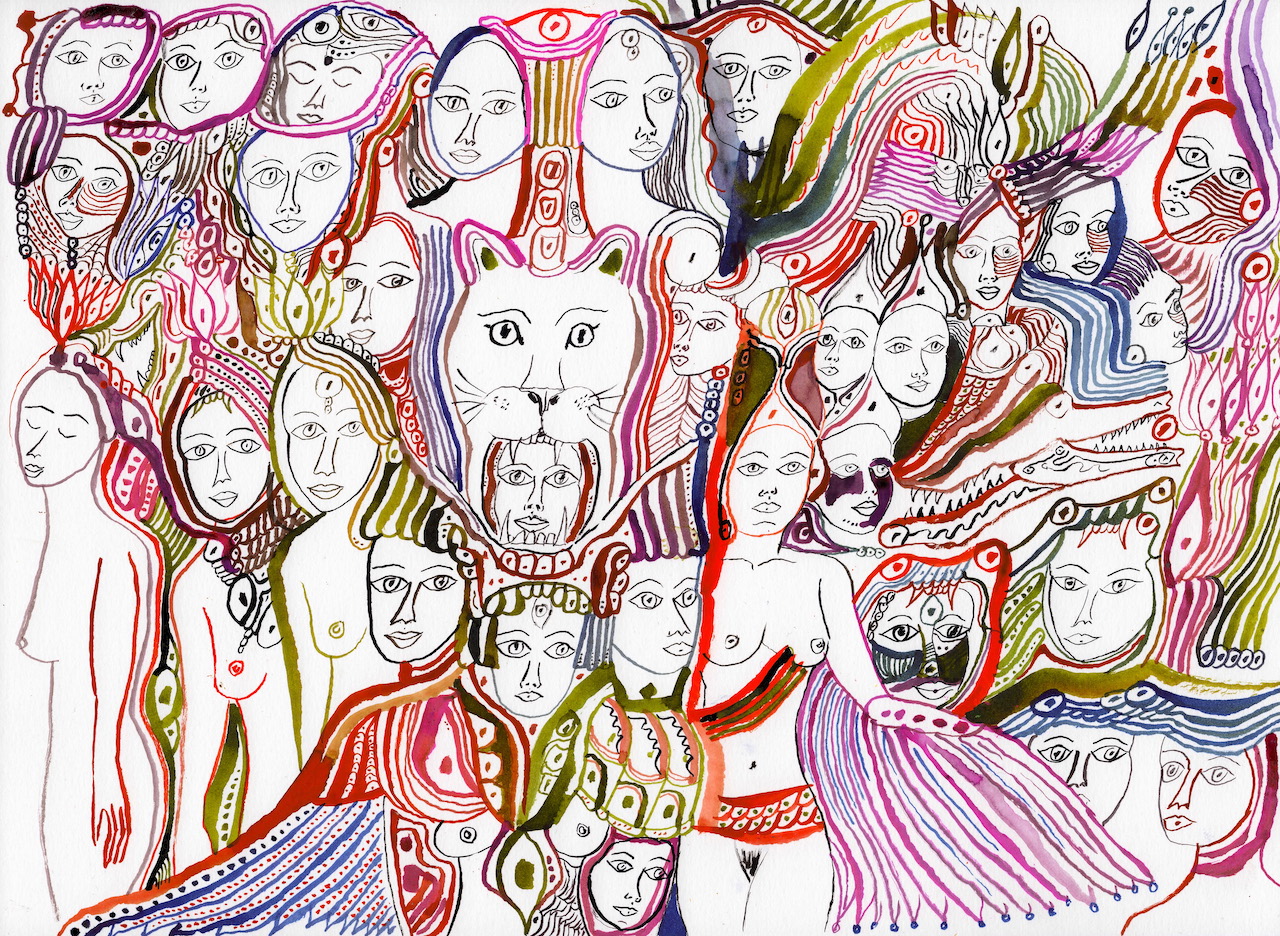 Arrington de Dionyso was born in 1975 and lives in Chicago, USA. He studied ethnomusicology, archetypal psychology and butoh dance theatre at the Evergreen State College in Olympia, Washington. His artistic practice integrates music and image making with his studies of Kabbalah, alchemy and shamanism. His group Malaikat dan Singa uses the tropes of diverse shamanic trance musics within a rock and roll performance context. He is also a co-founder of the Olympia Experimental Music Festival.

Here is the artist, in his own words:

"As a child both of my parents were ministers for the Methodist Church in diverse Chicago neighborhoods- every Sunday I had to attend services in English, Spanish, and Cambodian. When I was very young I was restless and bored having to sit in Church all day, and found my first psychedelic experiences by rubbing my eyes and looking at the crazy patterns of light that I could see when my fingers rubbed the eyelid. While everybody was talking about God, I imagined that this was my way of seeing God directly.

My mother was also a self-taught "naive" artist, designing murals for the church and sometimes working on oil paintings while I watched and drew pictures of dragons, lions, talking trees and dinosaurs on my own paper sitting beside her. She sometimes took me on trips to the Museum of the Art Institute of Chicago and at the age of 4 or 5 I could distinguish the work of all of my favorite painters such as Picasso, Matisse, Chagall, Dali, etc.

We also lived in Arkansas for a few years, age 9-12, there I made my own comic books and attended Children's Theater camps. We moved to Spokane and there weren't any children's theater programs there, so I started learning to create my own music. I eventually became a street musician, making money by singing very loudly on downtown street corners that I was a Lion, not a Lamb. I made cassette tapes to sell to the passerby. I moved to Olympia in 1992 and I was still making cassette tapes in the midst of an Independent Music Revolution, centered around the K Records/Kill Rock Stars/KAOS Radio scene of the day. My first band Old Time Relijun started in 1995 and I eventually came back to drawing and painting through the music because there was always a need to integrate images with presentation for concert posters, album covers.

Now I speak many languages English, French, Spanish, Italian, Indonesian- when you learn a new language, you gain a new soul. Musical languages and visual languages are the same thing- different instruments, different vocabularies. I take it all in, but I'm selective as to what I put back out- I like swimming with crocodiles, running with jaguars and flying with dragons. My favorite music in the world is Javanese "Jathilan" Trance Music combined with a Free Jazz bass clarinet. I like Cave Paintings & William Blake, Henry Darger and Pompeii, Francesca Woodman and China Faith Star. Pop Art and Postmodernism are as old as your grandparents now, it's time for the self taught artists to take their rightful place in the temples of high fashion and anarchy. Tantra means you breathe air, like, you really really breathe the air. You breathe the air and you feel the sparks of light electrify the circulatory system, it's nothing to be ashamed of. Don't just be a painter, be a breather and a dancer and the colors will come to life."