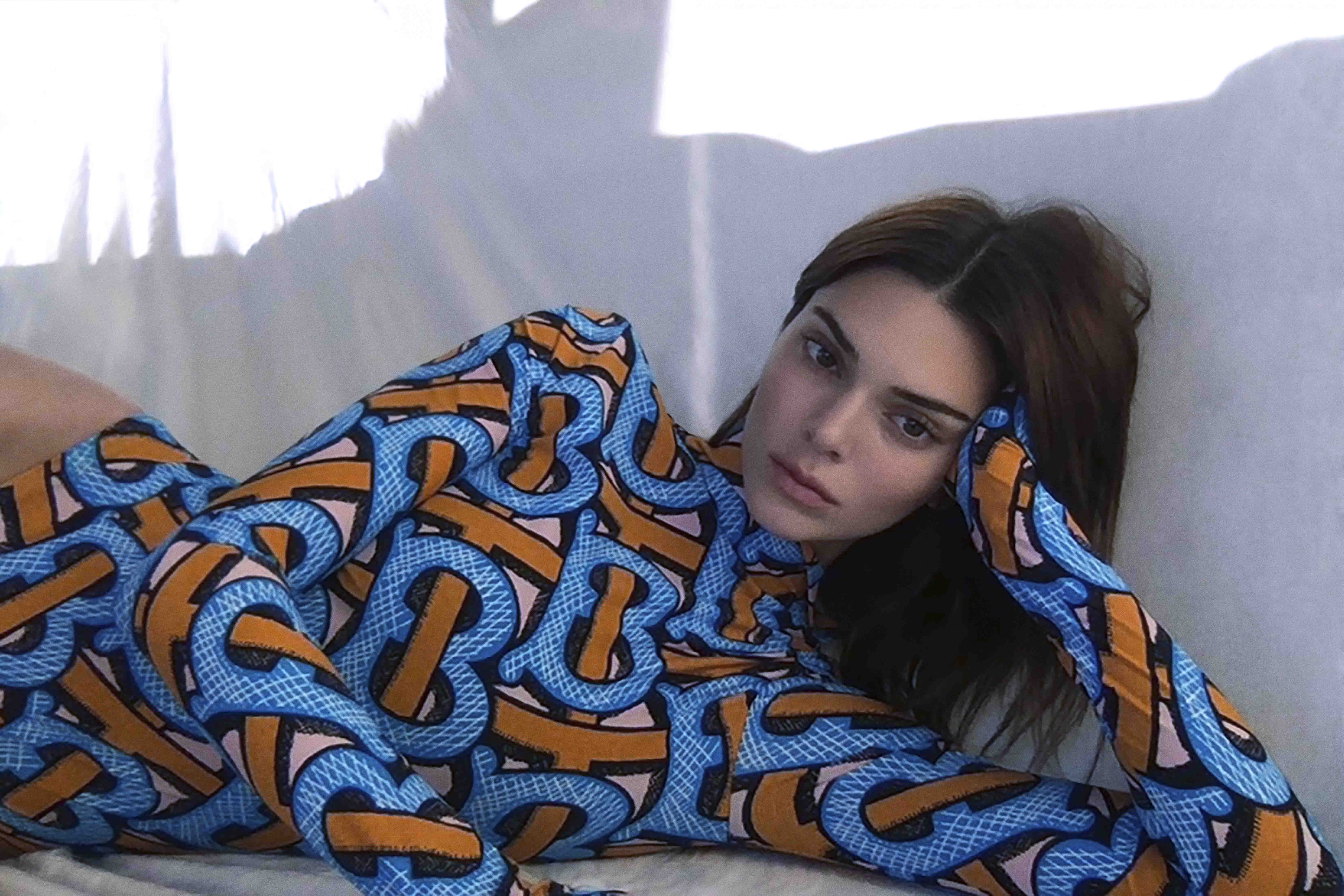 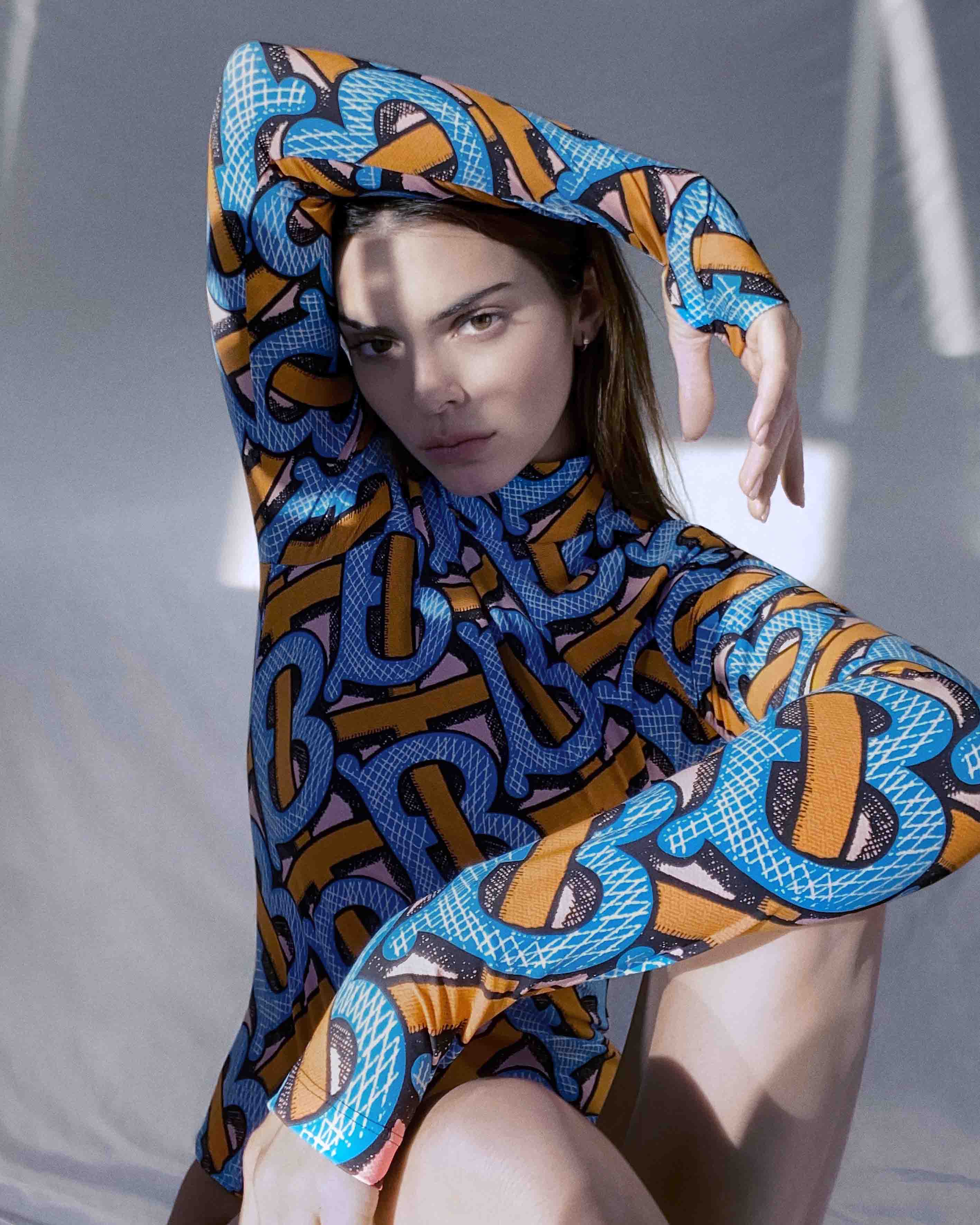 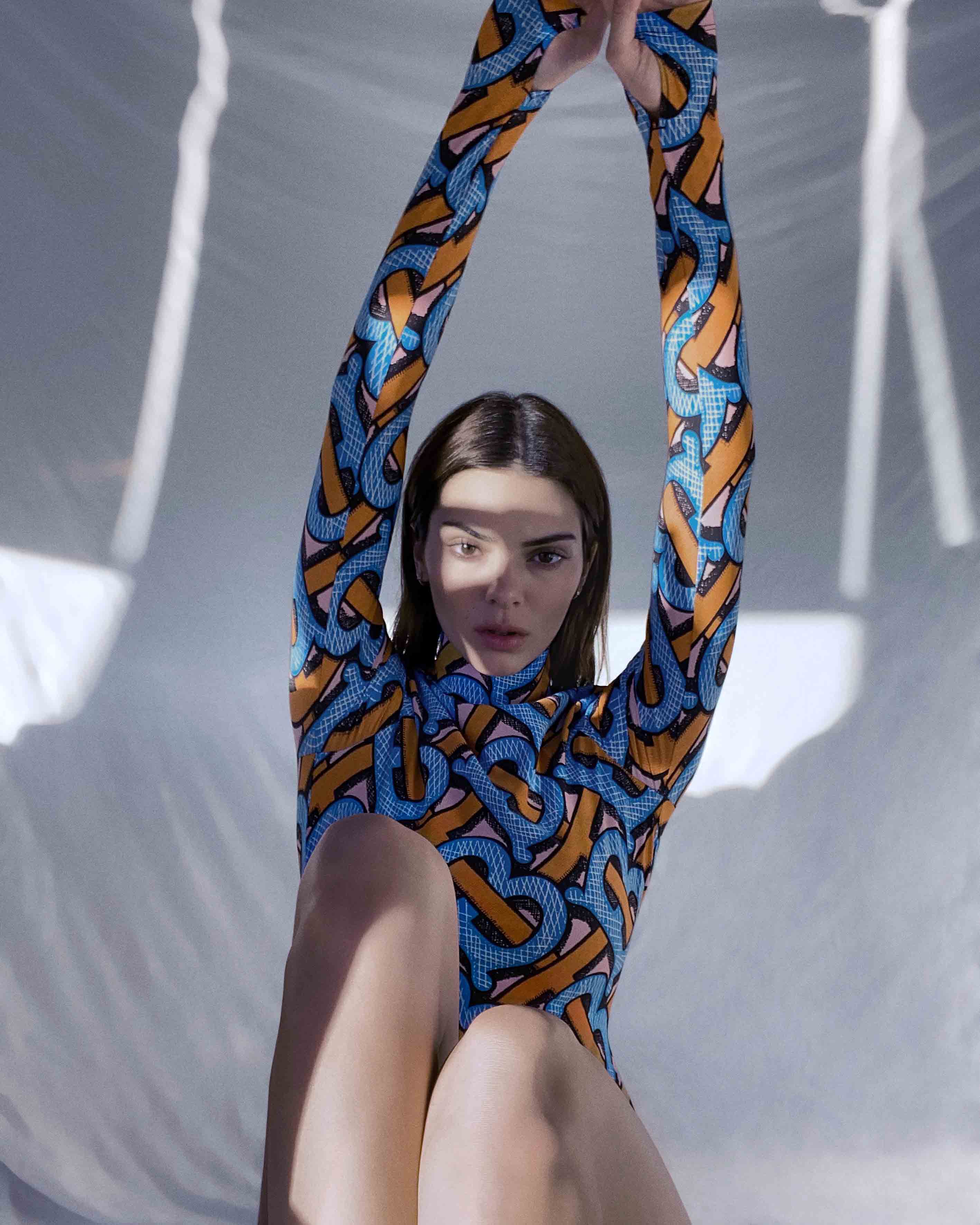 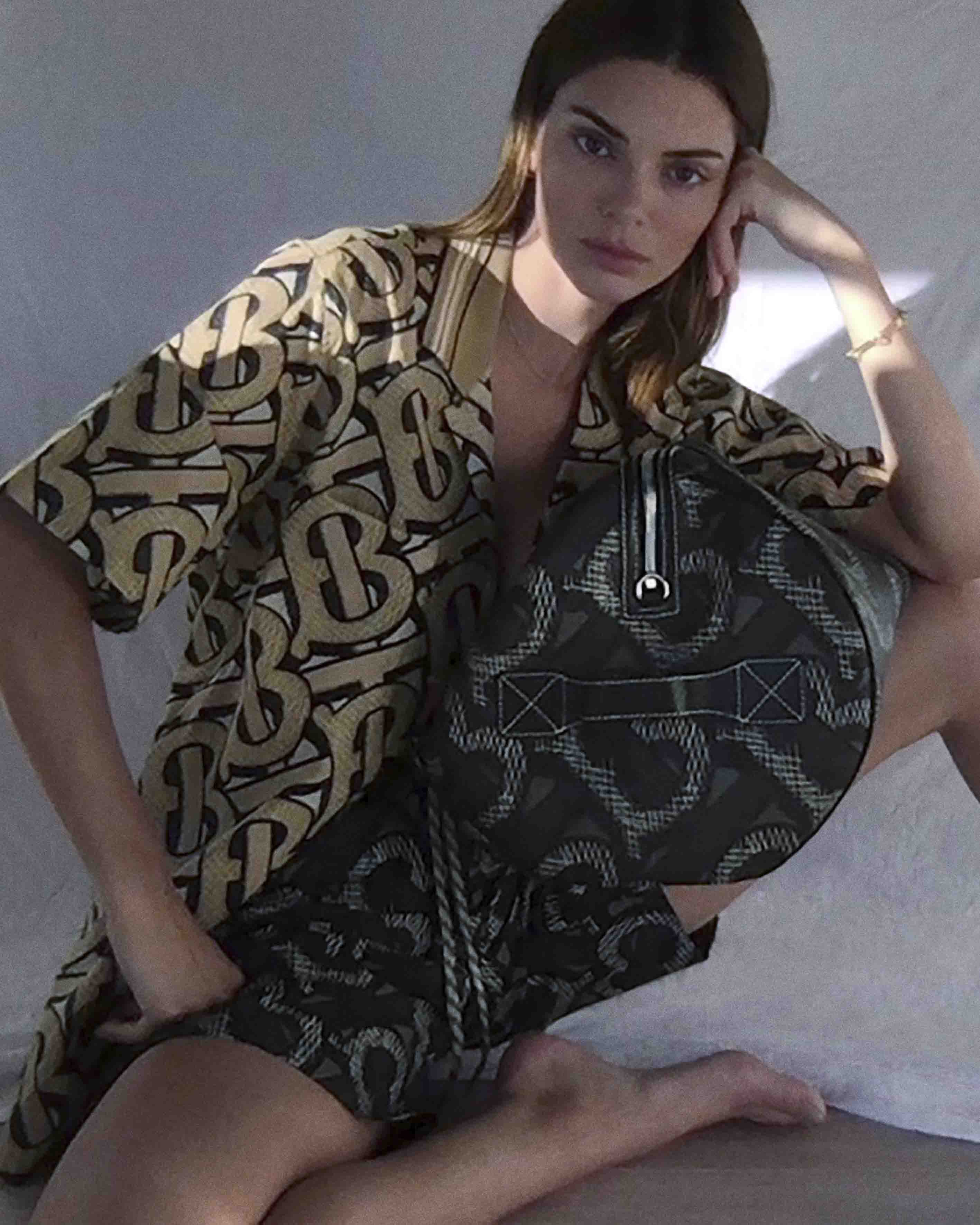 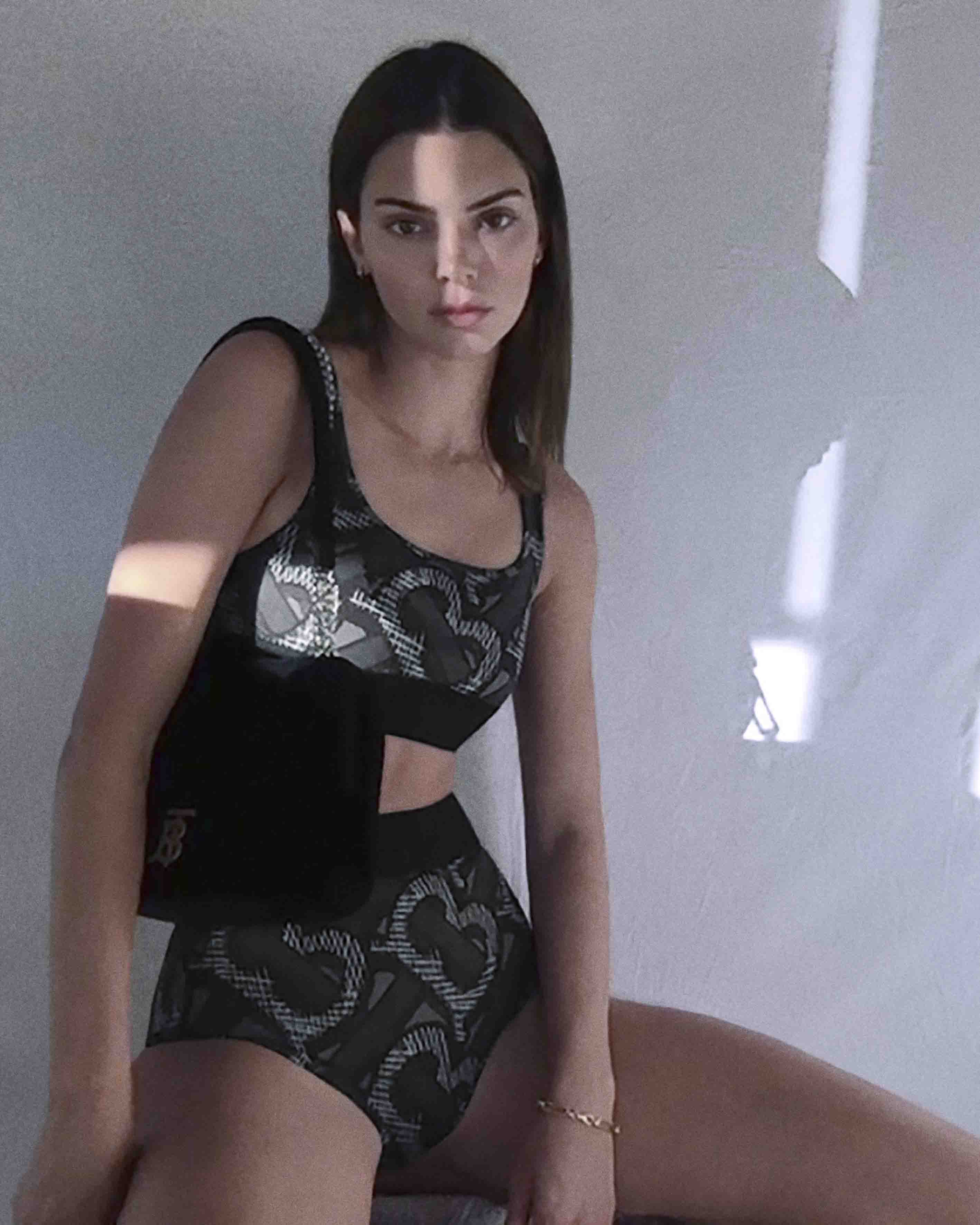 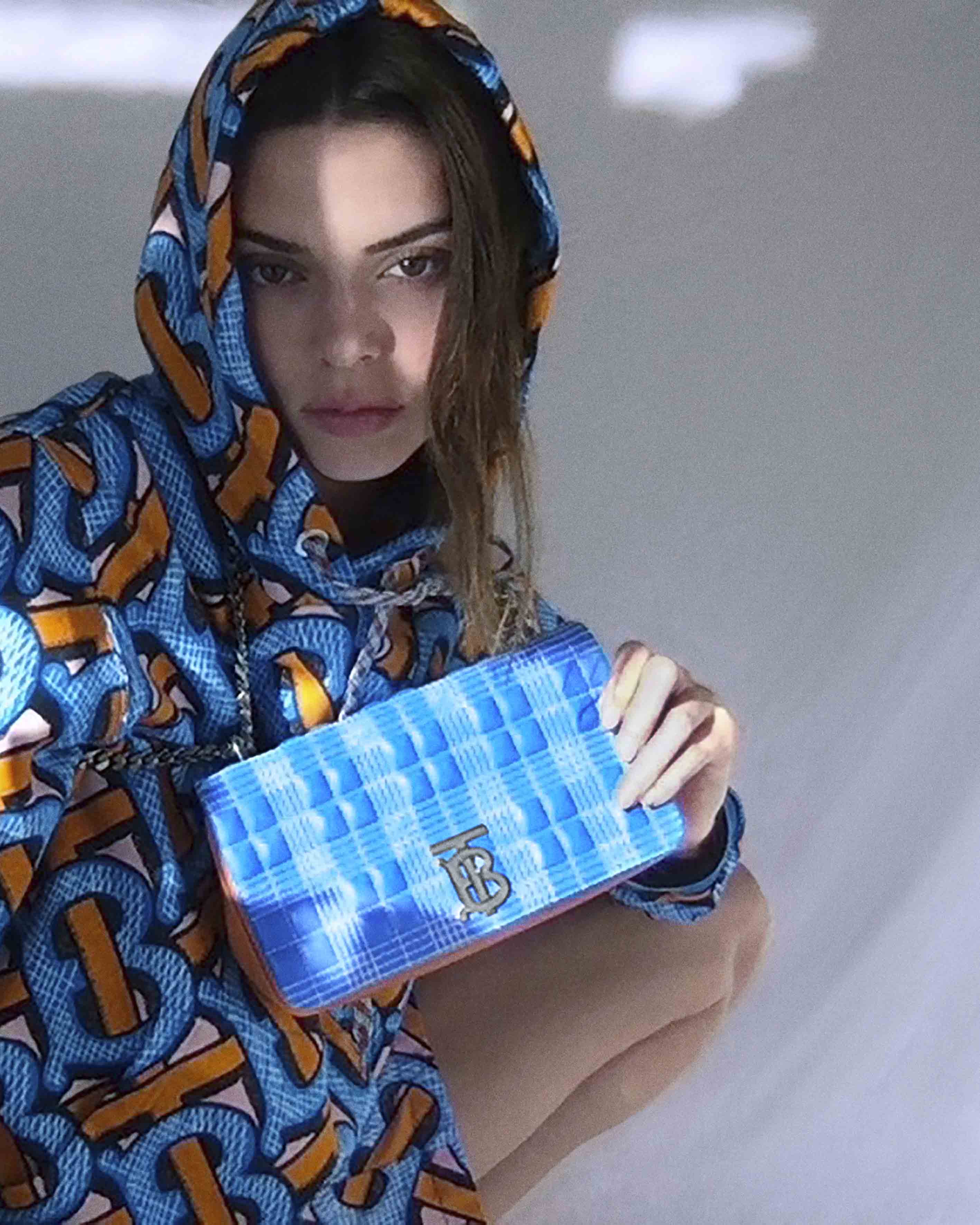 The TB Summer Monogram campaign captures a journey from reality to fantasy, blending the rawness of real-life capture with the fantasy of CGI technology. Building on the house’s longstanding leadership in digital innovation, the campaign video is set in a dreamlike CGI geometric world inspired by skateparks and swimming pools – embodying the free spirit and optimism of summer. Within this digital realm, Kendall brings to life four distinctive characters portrayed through a capsule of both womenswear and menswear staples from the new TB Summer Monogram collection. The campaign video is juxtaposed with a series of raw self-portraits, which were shot at home by Kendall on her computer, bringing a grounding and a physicality to the campaign.

To bring this campaign to life, Riccardo called upon a cast of iconic British creatives including photographer Nick Knight, art director Peter Saville and stylist Katy England. An ode to the fashion house’s founder, Thomas Burberry, the bold interlocking TB initials – created by Riccardo and Peter Saville in 2018 – is refreshed in a larger scale and colour palette of dark beige, azure blue, graphite and cobalt blue with orange accents. The summer-inspired collection of lightweight pieces is printed with the Thomas Burberry Monogram.

‘It is fascinating to see what is possible with technology. When we create images we want to project an emotion that is spontaneous and imbued with feeling. CGI is a very different process and brilliant since it allows people to come together virtually from all parts of the globe. The first stage followed a normal approach. I needed to properly look at the monogram collection to understand Riccardo’s concept and how to achieve the styling to fit with his aims. As we were unable to style and do looks in the usual way, during the early part of the lockdown, I styled part of it on paper and the other part at home with the help of my sons. It was very exciting to be part of this pioneering new process, I have been amazed seeing what the technology can do and it’s been interesting adapting to a totally new approach.’

‘This is my second monogram collection at Burberry and for me, the collection is all about celebrating the strength of the duality of feminine and masculine energy, blurring the lines and exploring this notion of youthful expression. For the campaign, I thought a lot about that day-dreaming reverie that I associate with summer, that time when you are drifting between reality and fantasy, and I wanted to portray this through the juxtaposition of the imagery. Kendall captured the reality by taking these real self-portraits in the collection, and Nick brought the dream to life, creating this unique digital realm transforming Kendall and allowing her to explore the duality of the TB Summer Monogram collection.’

‘It was exciting to take steps towards a sustainable future for fashion with this new Monogram CGI campaign - being able to develop last season’s Monogram imagery with the team, all from our homes, and take it into the virtual space.’

‘Having had a part in the creation of the Thomas Burberry Monogram itself I love seeing it in use, particularly with this summer’s products and colourways. It was great to have the continuity of involvement but when the project began we had no idea what lay ahead... The CGI experience felt really progressive, it was great that Riccardo, Nick, Katy and myself were able to see the work evolve digitally in front of our eyes in an entirely new way, which was a very different process to shooting in a photo studio, as the possibilities are so endless!’

‘I am so excited to feature in my second campaign for Burberry working alongside Riccardo. He always has such incredibly creative ideas, he loves thinking of different, innovative ways to tell a story and that can definitely be seen in the different facets of this campaign. Riccardo wanted to collaborate closely with me to bring this collection to life in a number of ways – he encouraged me to interpret the campaign myself, which was such an exciting opportunity! I loved being able to add my own personal touch to the campaign as I captured the collection through a series of self-portraits that I took at home. Alongside the iconic Nick Knight, Riccardo then pushed the campaign into this dream-like digital world as I transformed into CGI versions of myself embodying the four characters in the campaign video – which was so fascinating to see unfold! I really loved being a part of this creative process, watching it evolve from the physical to the digital, blending reality and fantasy. The collection and campaign are also completely my vibe – that relaxed summer spirit really resonates with me as a California girl!’